Virtually all types of pollution affect the rainforests in some way or another. This article covers an all too important relationship between environmental pollution and tropical rainforests, including the role of rainforests as pollution sinks, as well as the sources and effects of rainforest pollution. 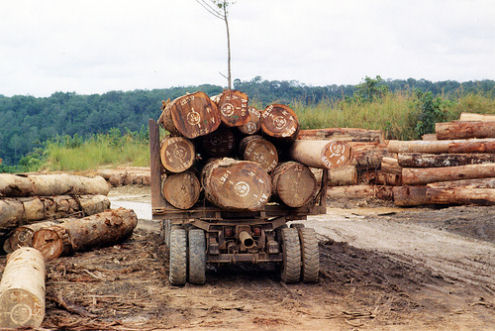 More on Effects of Pollution on Rainforests

Pollution invariably disrupts the environmental services provided by tropical rainforests. Among other things, the rainforests serve as:

So these vital services are seriously disrupted by air, water and soil pollution which all cause damage to the rainforests and people living in or around them.

The big relationship between environmental pollution and tropical rainforests appears to be three-fold:

As an example of point 1, waste dumped into rainforests can be generated by industrial or agricultural activities. For instance, production of oil by Texaco in Ecuador rainforest led to this company dumping millions of gallons of toxic waste into pristine rainforests that acted as pollution recipients.

Point 2 is well illustrated by the process of rainforest destruction which leads to pollution of the forests and wider environment. Activities such as clearance of rainforests for growing “cash” crops, cause the release of carbon dioxide into the atmosphere and contribute to global warming. Here rainforests act as pollution sources.

In point 3, rainforests act in their unique capacity as pollution sinks – they remove carbon dioxide from the atmosphere and thus are capable of neutralizing pollution.

As we know, greenhouse gases such as carbon dioxide (CO2) are serious pollutants which contribute to climate change on Earth, specifically global warming.

As an example, cars are among the biggest producers of CO2 emissions in the world. Car emissions produced anywhere in the world may be absorbed and removed from the atmosphere by rainforests located in tropical countries. By absorbing these emissions, rainforests help relieve the global warming pressure.

So from this point of view, tropical rainforests are uniquely placed to help regulate and stabilize global climate patterns. In other words, by acting as pollution sinks rainforests provide a common global good for the rest of humanity.

On the other hand, if rainforests are destroyed they will also act as major sources of global warming pollution.

This happens because rainforests are huge storages of greenhouse gases. And as a result of deforestation these greenhouse gases will be released back into the atmosphere and thus will further contribute to global warming.

Deforestation is a very serious problem - it has recently become one of the main causes of global warming. Global warming may, in its turn, have a negative impact on the rainforests. For example, warmer temperatures may cause an accelerated growth of pests which destroy the trees. Learn more about it in our article on effects of global warming.

So it is in the interest of all nations to have the rainforests intact and healthy.

Rainforest pollution has negative impacts on people, animals, trees & plants as well as the wider environment. Sources of environmental pollution affecting rainforest ecosystems can be both anthropogenic (human-caused) and natural.

Agriculture is a well known source of environmental pollution, specifically causing ammonia emissions from livestock farming and animal waste. Agricultural activities in rainforest areas are no exception to that.

But in addition to ammonia emissions, rainforest clearance by fire for agricultural purposes (especially cattle ranching) is also a source of harmful carbon dioxide emissions which contribute to global pollution and global warming. Below is a summary of agricultural contribution to rainforest pollution: 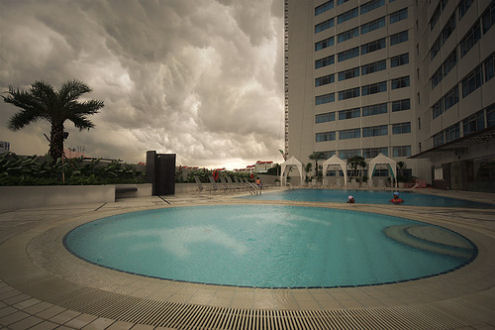 Dark Clouds in Singapore.
These clouds in Singapore originated in Indonesia as a result of illegal rainforest burning by farmers to clear land for plantations and other purposes.
Photo: Seema K K

It’s not difficult to imagine that industrial sources are major contributors to rainforest pollution. Some of the most important industrial activities causing pollution are summarized below:

Hydropower is a major source of energy supplies in developing rainforest countries. For example, around 83% of total power production in Brazil in 2004 came from this source. (Ref. 10) 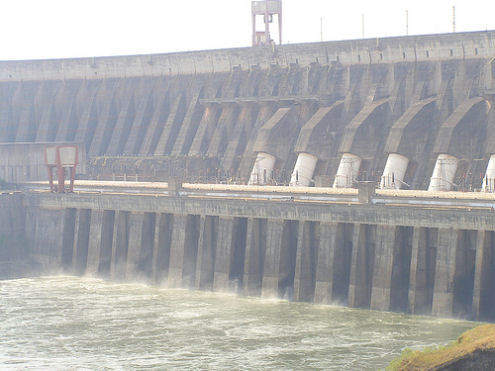 Itaipu Dam, Largest Dam in the World
Large areas of the rainforest were destroyed and many people displaced during the construction of this dam.
Photo: Flickr.com

Construction of dams used to generate hydroelectric power is a serious cause of rainforest pollution. The effects of dam construction on rainforests are as follows (Ref. 11):

Oil production and its related activities are infamous around the world for their capacity to bring pollution upon virtually any life-hosting environment that comes in contact with them, including water, soil and air.

Oil-related activities have been known to pollute vulnerable and highly valuable rainforest ecosystems as well. An excellent example of that is the above mentioned case of Ecuador rainforest pollution by Texaco oil operations.

Below we discuss some effects of oil production on people and rainforest ecosystems.

Oil spills in coastal areas as well as on land due to oil production and transportation cause water pollution, soil pollution and air pollution. Some of the effects are as follows:

Natural gas flaring as part of oil production releases methane and carbon dioxide (greenhouse gases) into the atmosphere contributing to air pollution and global warming. Other toxic chemicals are also released – nitrogen dioxide, sulfur dioxide, volatile organic compounds (VOCs). These chemicals may cause acid rain with all its consequences on humans, animals and rainforests. (Ref. 15)

Construction of oil producing facilities as well as pipelines may itself require clearances of large chunks of rainforests, which will most likely bring up further environmental pollution issues. EXAMPLE: The Chad - Cameroon Pipeline. The pipeline cuts through the coastal Cameroon rainforest. Project-related construction of roads led to illegal poaching and logging (with all the environmental consequences resulting from it). Construction already caused oil spills and pollution of drinking water. (Ref. 16)

Large industrial projects (such as the mining and logging ones described above) require road infrastructure for their successful implementation.

Since tropical rainforests act as global pollution sinks, this means they are also affected by air pollution (specifically greenhouse gases) coming from different parts of the planet.

Most anthropogenic greenhouse gas emissions come from the burning of fossil fuels in industrial production, various industrial processes, commercial and residential sectors, and in road transport; also from deforestation and agricultural activities. (Ref. 17)

Wild forest fires and volcano eruptions are some of the natural sources of rainforest pollution.


A Bit More on Effects of Environmental Pollution on the Rainforests

Alongside the structural changes to rainforest ecosystems resulting in widespread pollution (as we described above), rainforests have to deal continuously with ongoing pollution processes affecting their health. Specifically, we refer to air pollution which knows no borders and can pose serious, albeit invisible, danger to forests and their animals.

As already mentioned, air pollution affecting rainforests comes from both local and global sources. Rainforests can neutralize some forms of air pollution (for example, removal of a certain amount of CO2 from the atmosphere) while unable to resist other pollution types (for instance, acid rain).

There are many types of air pollutants that will negatively affect the health of rainforests and animals residing within them. Some of the effects of air pollution on humans, such as problems with the respiratory system due to ozone pollution, may also apply to higher forms of animal life.

Apart from carbon dioxide emissions, acid rain is possibly one of the more serious types of rainforest pollution. Acid rain:

Environmental pollution is a global problem, and the rainforests are not immune to it. The global importance of the rainforests is very clear – among many other things, they act as pollution sinks and help fight global warming.

We have a “double whammy” situation here: on the one hand, clearance of the rainforests causes environmental pollution; on the other hand, the cleared rainforest area is lost as a pollution sink which even further magnifies the global pollution problem.

It is therefore the responsibility of the whole international community to come together and make sure rainforests are kept healthy and safe, to ensure our own survival.

14. Environmental issues in the Niger Delta. (February 24, 2008). In Wikipedia, The Free Encyclopedia. Retrieved April 3, 2008 from http://en.wikipedia.org/w/index.php?title=Environmental_issues_in_the_Niger_Delta&oldid=193638402