Endangered animals have really been capturing the attention of the world since the introduction of the IUCN Red List of Threatened Species in 1963.

Mostly as a result of human actions, there are now thousands of endangered species of animals representing virtually every part of the planet, and this number is constantly growing.

Among endangered species, we can find some of the most popular and charismatic animals such as orangutans, spider monkeys, crocodiles, gorillas, macaws, and the list goes on and on.

By a broad definition, endangered animals are all those species that are threatened with extinction to one degree or another.

By a more precise definition provided by the IUCN (International Union for the Conservation of Nature and Natural Resources, also known as the World Conservation Union), a level of threat to each species is determined according to the following scale: 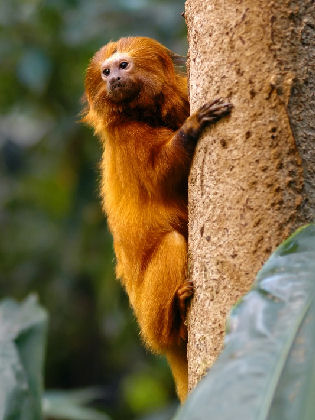 As you can see, the Endangered Animals may include both:

It’s certainly worth highlighting the Vulnerable Animals category (VU) as well, which is defined as species “considered to be facing a high risk of extinction in the wild” (ref. 3).

Together, these three categories (EN, CR and VU) form a group of threatened species.

Some Statistics on Endangered Animals

Vertebrates are a group of animals that we know most about.

Amphibians are likely to be the vertebrates at highest risk of extinction as compared to other animal groups (with 32% of all assessed amphibians at risk, classified as threatened). (Ref. 4)

Among other assessed groups of animals, 23% of mammals and 12% of birds are known to be at risk of extinction (classified as threatened).

Though we have a good general idea about the current state of vertebrate animals, our knowledge is still incomplete as only 40% of all known vertebrate animal species have been assessed. (Ref. 5)

Endangered animals live in all parts of the world. But there are a lot more of them in tropical rainforest countries, most likely for two fundamental reasons:


For example, many endangered animals are widely used for “bushmeat” trade or for pet trade.

Point 1 is also re-enforced by the IUCN’s 2004 Global Species Assessment.

The assessment confirms that most threatened species of mammals, birds and amphibians (CR, EN and VU) are located in the tropical areas, such as Central and South America, tropical Africa, and tropical South and South East Asia (especially on mountains and islands). (Ref. 6)

The most recent developments in human history, such as the industrial revolution as well as the rapid growth of the human population, have arguably become the main causes in putting other forms of life on Earth in serious danger.

Explore the main causes of animal extinction and endangerment here.

Some animals had been driven to total extinction, such as the famous bird Dodo. Others had somewhat better fortunes.

Below are the two stories that demonstrate just how much power we, the humans, have over the nature and how extremely carefully we should use it in our dealings with other species.


Tasmanian Tiger (Thylacine) – The Story with a Sad End 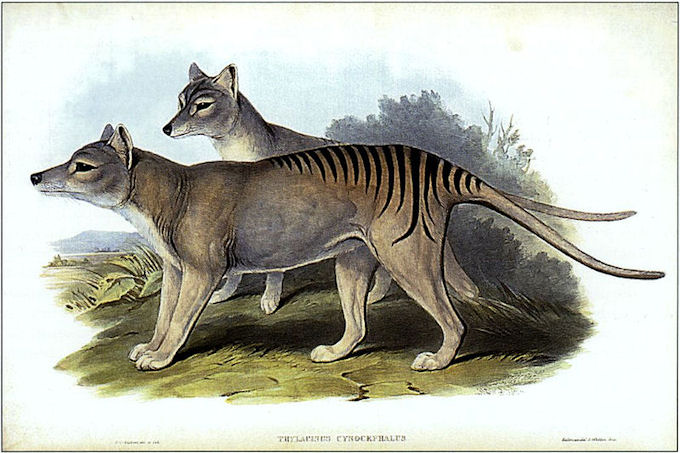 The story of the Tasmanian tiger (thylacine) is one with a sad end.

The Tasmanian tiger was a large carnivorous marsupial that originally inhabited the Australian mainland and New Guinea but was found only on the island of Tasmania in most recent historical times. (Ref. 7)

This animal looked like a dog, with yellowish brown fur and dark stripes on its back and rump. (Ref. 8)

The last known individual of this species died in a zoo in 1936.

As of 1996, the IUCN classifies this species as extinct.

As David Owen notes, the thylacine’s extinction was “a human-engineered folly” (ref. 9).

He goes on to state that the animal was subjected to “systematic persecution through trapping and snaring, poisoning and shooting” (ref. 10).

It was “was hunted to extinction in the blink of an eye, because of its supposed attacks on sheep” (ref. 11) (and the sheep were introduced to Tasmania by European settlers at the beginning of the 19 th century).

Some researchers claim that the thylacine’s attacks on the sheep were grossly exaggerated. (Ref. 12)

The government bounty and a sheep-protecting private bounty became strong drivers of the Tasmanian tiger’s decline, further accelerated by hunting, habitat alteration and, possibly, a viral (or bacterial) infection. (Ref. 13)

In spite of the lack of credible evidence, there’s plenty of information on the internet reporting recent sightings of the Tasmanian tiger in the wild.

This, of course, means that the hope for a miraculous survival of this animal is still somehow alive.


Golden Lion Tamarins – The Story with a Happy End

Though the golden lion tamarins are still classified as endangered by the IUCN (as of 2003), their story is certainly much happier than that of the thylacine’s.

The golden lion tamarins are small primates with golden silky fur that currently inhabit only several patches of lowland forests of the Atlantic coast in Brazil. (Ref. 14)

The main threats to these animals had historically been their habitat destruction and fragmentation, and to a smaller degree – capture for the illegal animal trade. (Ref. 15)

The destruction of the tamarins’ habitat started many centuries ago with the introduction of sugar cane plantations by Portuguese colonists, which required the conversion of primary rainforest into plantations. (Ref. 16)

The deforestation of the coastal forest continued well into the 20th century for the purposes of fuel supply as well as for pasture and crops. (Ref. 17)

The situation was made worse by the export of the tamarins to zoos, biomedical research institutions and for the pet trade.

But thanks to further research into the ecology of the tamarins and appropriate genetic management, relative success was achieved in management of the captive breeding populations and stemming their declines.

Alongside rehabilitation of the captive populations, field research and conservation efforts were launched in Brazil in 1983, for the purpose of conserving these endangered animals in the wild.

Poco das Antas Biological Reserve was the focus of these activities as, at the time, it was the only area providing protection for the animals. (Subsequently, a second federal biological reserve for the tamarins, Reserva Uniao, was established in 1998). (Ref. 20)

Re-introduction of captive-born tamarins, translocation of wild-born tamarins and community education activities all contributed to the success of the tamarin conservation in the wild. (Ref. 21)

The support of the private sector was another important factor for success.

Tamarins were re-introduced into 16 privately owned ranches, 7 landowners enrolled their forested areas as private reserves, and 3 ranchers planted agricultural forest corridors between their forests and those of their neighbours. (Ref. 22)

This concerted action by most stakeholders secured success for the tamarins’ conservation.

As we hear stories about more animals becoming endangered in virtually every part of the world, we become more aware of the nature’s plight and of conservation actions we need to take to prevent the nature’s decline.

I have shown above with the case of the golden lion tamarins that it is possible to save endangered species from slipping into the extinct category.

But to achieve that a lot of good will is required from all the parties involved.

We need to prove that conservation is the sustainable way forward, and no one-off exploitation of natural resources (including endangered animals) should be allowed for the benefit of the few and to the detriment of the rest.