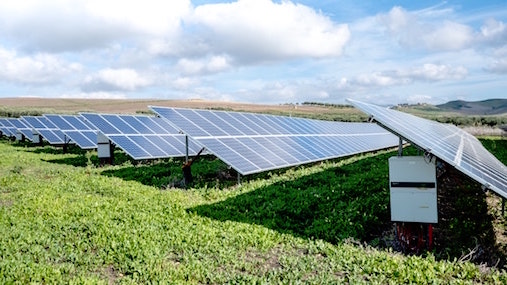 As of today, solar electricity provides a very small share of the total electricity supply in the world.

However, it has an enormous potential which is especially important while we are facing such challenges as global warming, environmental pollution and others.

The Sun is the most abundant and primary source of virtually all energy on Earth. In fact, most types of renewable energy including wind and ocean are powered by the sun.

We cannot imagine the existence of our own race (let alone many other plant and animal species) without the sun embracing our beautiful planet every day with its rays of unlimited energy and warmth.

The most important thing we need to do now is to find efficient ways of harnessing it for the benefit of people and for the sake of keeping the Earth's precious ecosystems intact.

Finding solutions for generating efficient and affordable solar electricity is perhaps the single most important aim we need to achieve in order to tackle our current environmental challenges.

In addition to that, there is also a lot of activity in the area of relatively new technologies such as thin-film photovoltaics, organic photovoltaics and others. We discuss them below as well.

There are several technologically established ways of sun-powered electricity generation:

Solar PV technology is able to generate electricity directly from sunlight via the photovoltaic effect when the energy of solar photons is allowed to create electron flows using semiconductors. (Ref. 1)

Solar thermal technology in its turn provides for an indirect way of electricity generation: first it produces steam and then uses this steam to produce electricity by running a conventional turbine generator. (Ref. 2)

We start our discussion with photovoltaic technology.

The beauty of photovoltaics is that it converts sunlight directly into electricity by allowing the energy of solar photons to create electron flows with the help of semiconductors; this is its main advantage over solar thermal technology. 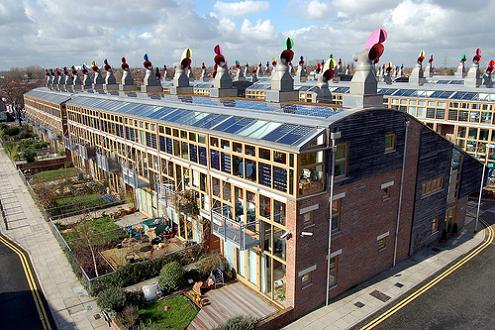 On top of being one of the most established solar power technologies, solar photovoltaic power offers individual consumers the flexibility and convenience of installing solar panels right in their residences, for example, on rooftops.

For those PV owners who are connected to the grid systems of their countries (ex., Germany and Spain), there is an added bonus: they may be able to sell some of their excess solar power back into the grid at the rate of so-called feed-in tariffs.

PV technology is also an excellent opportunity for off-grid locations where no other option for power connection is available.

No wonder it has become an option of choice for small- and medium-sized applications.

But even though it is now widely used in the form of stand-alone devices, we are witnessing an appearance of multi-megawatt utility-scale PV plants throughout the world as well.

Individual photovoltaic cells consist of several layers of different material; the main type of material is a semiconductor, such as silicon.

PV cells on their own are not powerful enough to provide significant amounts of electricity. So they are normally connected together into photovoltaic modules which may then be arranged in arrays.

Construction of utility-scale photovoltaic power plants (as opposed to individual installations of private PV systems) is an important recent development.

PV power plants supply electricity to large numbers of consumers like traditional utilities do. In this case consumers will pay for their actual electricity use instead of having to incur a significant capital cost for installing a private PV system which in reality means making an up-front payment for around 20 years of power supply.

Achieving the maximum possible efficiency of converting sun light into solar power has always been a challenge for the PV industry.

For example, the theoretical maximum efficiency of traditional silicon photovoltaic cells is 29% (Ref. 3) which is now considered quite attainable.

But we know that much higher efficiency can be achieved with relatively new (though quite developed) concentrating solar photovoltaic technology (CPV).

The basic principle of CPV is that special reflective solar collectors (ex., in the form of a dish) concentrate solar light on a small area of PV chips located at the focal point of such a collector.

This technology can potentially achieve efficiency as high as 50%. It also offers further savings since solar collectors are cheaper than an equivalent area of solar cells based purely on expensive silicon. (Ref. 4)

This technology offers a utility-scale service to the consumer.

In response to the high production costs and rigidity of traditional, crystalline silicon solar panels, the PV industry is investing a lot of effort into developing the next generation of solar power technology – thin-film solar cells.

Thin film solar cells are made by depositing several extra-thin layers of PV material on to a flexible or hard substrate thus forming a finished product.

This is of course a very exciting type of new technology which can offer many benefits indeed.

The benefits are not only lower manufacturing costs and big savings in the use of precious resources such as silicon. Thin film solar panels also offer the flexibility with which they can be installed inside or outside buildings or other objects or taken to remote areas and used when centralized power supply is not available. This is not even to mention their aesthetic advantage over traditional solar panels.

A major challenge here though is the efficiency of thin film cells which is significantly lower than that of their crystalline silicon counterparts.

Popular types of PV compounds that are used for the production of thin-film cells are:

However, such compounds are limited resources too, and may also be expensive for use in the manufacturing process.

In this sense development of organic solar cells looks really promising because they can be produced cheaper and technologically easier than other types of thin-film cells.

Organic solar cells are called so because they are based on carbon compounds found in plentiful supply in nature. They are so flexible that they can be used for a whole variety of different applications incl. clothing, packaging, consumer electronic devices etc.

One of my favorite types here are organic dye-sensitized solar cells which are highly flexible and use organic dyes from plants (such as berries) as one component to generate PV electricity.

We understand clearly that the efficiency rate at which a certain type of technology converts sunlight into solar electricity is one of the deciding factors for private green investors who would be willing (or not) to put funds into the development of such technology. 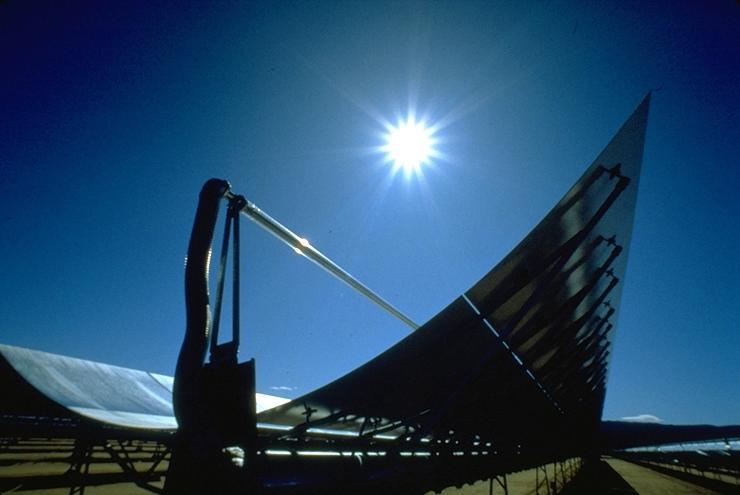 From this perspective, many experts are now touting concentrating solar thermal technology (CST) as an achievable solution which can realistically replace fossil fuels in the foreseeable future.

CST generates electricity by using reflective collectors (ex., lenses or mirrors) to concentrate sun light and produce heat (hence the term thermal) which is then used to run a conventional thermal power plant.

It has been reported that the theoretical maximum efficiency of CST would be around 95%. (Ref. 5)

Different types of CST can achieve different rates of efficiency. For example, some types of parabolic troughs will work at 56%, solar power towers with heliostats – at 73% and dish concentrators – at 80%. (Ref. 6)

A parabolic trough is the most developed type of CST. It is a parabolic reflector that focuses sunlight on to a receiver (a tube) which is located above the central line of the reflector and filled with a working fluid that is heated by sunlight. The heated fluid flows through the receiver and is then used as a source of heat for a power plant. (Ref. 7)

The big advantage of parabolic troughs over PV cells is that it is much cheaper to store energy in the form of heat than in the form of electricity. It means that such CST electricity can be obtained on demand at any time of the day (incl. peak times and nights) which is not cheaply available with PV technology.

A solar power tower, with the receiver at its very top, gets concentrated sunlight from a field of heliostats (mirrors that track the sun) surrounding the tower. The sunlight heats the working fluid inside the receiver which is then used as a source of heat for a thermal power plant.

A dish-Stirling system is a stand-alone dish that consists of a collection of mirrors focusing sunlight on to a receiver which is located at the focal point of the dish, and heating the working fluid. A Stirling engine then uses the working fluid to generate power.

Solar electricity is undoubtedly an industry with a huge green investment potential. As we mentioned above, some solar technologies are already quite developed while others are not ready for prime time yet. It will take a determined co-operation by all the stakeholders in this process to take solar power into the mainstream of energy industry.