We classify anthropogenic causes of pollution as the ones which originate from excessive levels of production (processing) and consumption of physical resources. 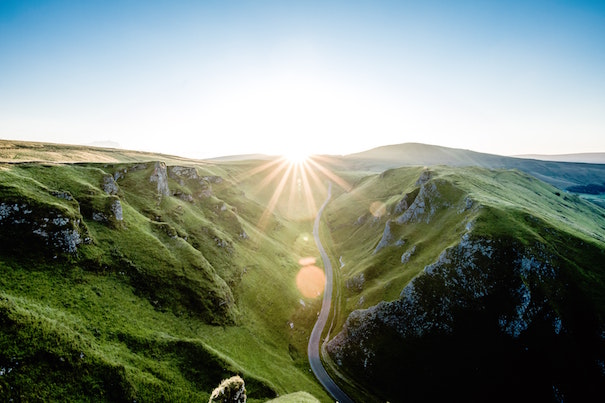 Production Side
Consumption Side

What exactly are causes of pollution? Let's try to define the concept of pollution first.

Here are just a couple of definitions:

Pollution is the introduction of contaminants into the environment that cause harm or discomfort to humans or other living organisms, or that damage the environment. (Ref. 1)

Any use of natural resources at a rate higher than nature's capacity to restore itself can result in pollution of air, water, and land. (Ref. 2)

We can expand the second definition and conclude that pollution takes place because:

To add to that, it is not only excessive production but also inefficient & dirty methods of production which become sources of environmental pollution.

And it is not only excessive consumption but also careless & thoughtless disposal of post-consumption waste resources which could otherwise be recycled.

Our analysis of causes of pollution focuses on:

Here is its schematic presentation:

We start the discussion with the fundamental drivers of pollution. 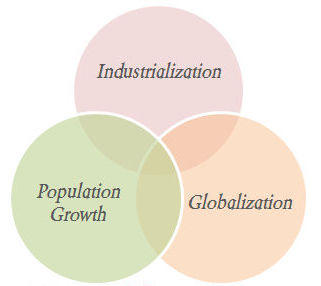 The humanity had known pollution, to some extent or another, at least since the times the fire had been invented.

But it was only with the onset of the industrial revolution in the 19th century that people realized the seriousness of the pollution problem and its often devastating effects.

In the last 200 years or so there appeared several fundamental trends which became the major forces behind the surge in levels of air, water & land pollution throughout the globe.

Population growth is the second fundamental pollution cause. With population numbers literally exploding around the world, the demand for food and other goods goes up. This demand is met by expanded production and use of natural resources, which in turn leads to higher levels of pollution. 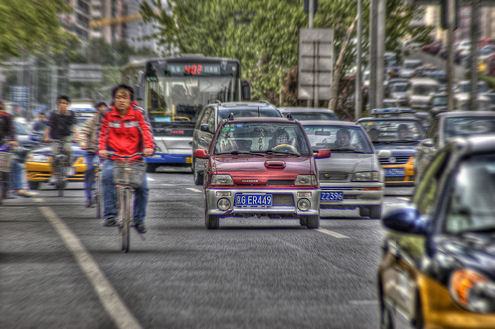 Globalization is another major cause of pollution. Globalization has become an effective facilitator of environmental degradation. Developing countries usually have much looser laws on environmental protection. With this “benefit” as well as the population growth and easy availability of cheap labor, big industry prefers to move its facilities to such “pollution havens” rather than work in more regulated markets.

So we won’t be wrong if we consider industrialization, population growth and globalization the fundamental drivers of pollution, the very roots of the gigantic pollution tree.


Primary and Secondary Causes of Pollution

Taking a step down from the fundamental drivers, we can now approach production & consumption as primary & secondary causes of pollution. 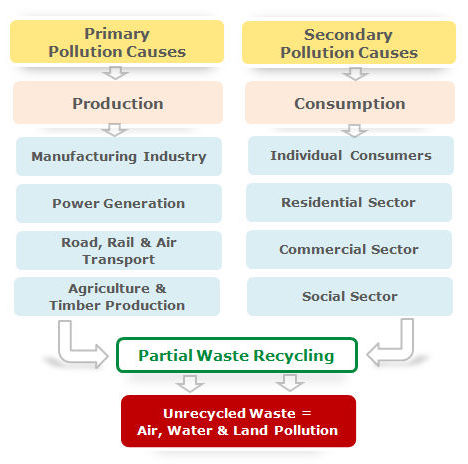 We refer to PRODUCTION as the primary cause of pollution because the whole cycle of extracting and processing natural resources and then selling processed goods starts from this point. And it obviously comes before consumption.

The diagram above is a basic presentation of major sectors which comprise numerous polluting sub-sectors.

The production side of the diagram includes manufacturing industries, power generation, road, rail & air transport and agriculture & timber production. In reality, it can be of course broken down into many other industries / sub-industries.

So how does the production side contribute to global pollution?

A car is a necessity for many people who use it in their everyday lives. In order to produce cars, a car manufacturer needs to:

That is a very simplified explanation of how manufacturing contributes to environmental pollution.

We'll now have a look at consumption.


We refer to CONSUMPTION as the secondary cause of pollution because this stage comes after, and depends on, production.

The consumption side of the diagram includes individual consumers as well as residential, commercial & social sectors which utilize the goods offered by the production side.

And how does the consumption side contribute to global pollution?

Let's continue with the example of the car. Each car owner needs to: 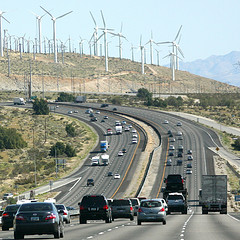 That is another simplified explanation of how consumption becomes a significant cause of pollution.


So production and consumption are the basic causes of pollution.

If that is the case, then each industry / sector that "belongs" either to production or consumption becomes a source of pollution.

Let's look at pollution sources in more detail below.

When we think of pollution, the first thing that naturally comes to mind is manufacturing.

And that is no surprise. Images of enormous chimneys emitting heavy dirty fumes into the air are very powerful indeed, and are directly associated with pollution.

Manufacturing includes numerous industries which are in fact sources of all types of pollution - air, land and water.

We have grouped manufacturing industries into 5 large sectors, as you can see in the diagram below:

So each of these sectors including their own sub-sectors is a source of pollution:

This classification aims to give us an idea of the "pollution's points of origin" from the manufacturing perspective. It is in no way an exhaustive list of polluting industries.


Power generation is another huge source of pollution which is nowadays associated with smoky chimneys even more than manufacturing.

The classical example here is the burning of fossil fuels to generate power. Carbon dioxide and other harmful gases are emitted in the process and cause serious ecological damage for many years to come.

Nuclear power is far from being a clean source of energy, even though its lobbyists may claim so. The toxic radioactive waste produced as a result of its generation takes thousands of years to decompose and become harmless. So don't fall for the lie of looking at nuclear as a "green" source of energy just because it doesn't emit greenhouse gases into the atmosphere.

So here are some major sources of pollution from the power-generation sector:

Public transport & shipping are also significant contributors to global pollution levels. All of them use fossil fuels for operation. Rail transport is probably the cleanest of all the types, and air transport is assumed to be one of the least efficient ones.

Sources of pollution by types of transportation:

Livestock farming uses vast amounts of resources and produces a lot of waste. Harmful fertilizers are widely used to grow cereals and other plants - such chemicals affect negatively the wider environment as well as human health.

Timber production is a major cause of global deforestation which releases carbon dioxide into the atmosphere.

Sources of pollution from the agricultural sector:

While production sectors are obvious examples of "pollution creation", consumption presents a more subtle side to this issue.

When we look at individual consumers, a lot of pollution comes from landfill disposal of post-consumption waste which could actually be recycled. At the same time, there are many consumer goods which cannot be recycled - and they end up on the landfill as well.

As for the wider residential sector, domestic gas heating systems and private transport are no doubt some of the major contributors to global pollution. On top of that, many residential items which can or cannot be recycled (ex., domestic furniture) are also sent to landfills.

Sources of pollution by individual consumers and residential sector:


We have a similar situation with the commercial & social sectors. Any waste generated from the use of premises as well as transportation all contribute to pollution levels in many different ways. 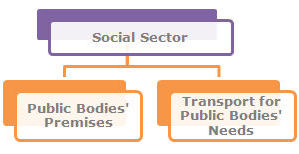 We refer to pollution agents as the chemicals which are released into the environment as part of the waste products generated from production and consumption activities.

In other words, pollution agents are the "operators" which make pollution "happen".

They are also known as environmental pollutants, air pollutants and so on. Some of them are carbon dioxide, sulfur dioxide, nitrogen oxides.

Feel free to learn more about environmental pollutants by further exploring our website.