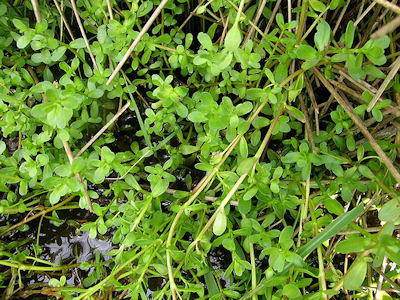 Brahmi (Bacopa monnieri) is a plant that originated in India, and is now widely used in Ayurvedic medicine.

Brahmi may help us deal with tiredness mainly because it can improve our mental clarity and alertness as well as other mental processes including: attention, memory, general cognitive function. (Ref. 1)

Once mental clarity is achieved, people usually stop complaining about "lack of energy" and simply get on with normal day-to-day activities.

There has been a lot of research done in respect of health benefits and medicinal properties attributed to Brahmi.

Scientists believe that many positive effects brought about from taking Bacopa are achieved thanks to one of its unique chemicals - a saponin called bacoside A, and its ability to fight oxidative stress within the body. (Ref. 2)

We know that oxidative stress - an overload of free radicals - within our systems can cause a lot of damage and lead to illness and chronic disease.

Some of the most potent enzymes that scavenge free radicals are superoxide dismutase, catalase and glutathione peroxidase. On the other hand, the non-enzymes with antioxidant (free-radical-fighting) properties are vitamins and other chemical compounds (ex., thiols, saponins, flavonoids).

Research shows that one of Brahmi's major active components that is of special interest to us - saponin bacoside A that we mentioned above - possesses antioxidant properties that provide powerful non-enzymatic protection against oxidative stress.

In one of the experiments, researchers demonstrated that bacoside A fights oxidative stress in animals (rats). Researchers assessed different groups of rats - the ones that were administered bacoside A, and the ones that weren't. They found that the brains of bacoside-A-taking rats contained much higher levels of antioxidant enzymes (ex., superoxide dismutase and catalase) and antioxidant vitamins (vit. C, E and E) than the brains of rats that weren't given any bacoside A. (Ref. 2) In other words, bacoside A somehow encouraged higher levels of these antioxidants inside the rats' brains.

Oxidative stress has a negative "dragging" effect on the whole immune system - which we consider to be a major cause of tiredness.

So the fact that Brahmi fights oxidative stress further supports our reference to Bacopa as an energy food.

The rat-related study cited above points out that Brahmi is also used as a nerve tonic by the indigenous populations of India to control a variety of medical conditions related to dysfunction of the central nervous system: anxiety, insomnia, hysteria, epilepsy and so on. (Ref. 2)

Further research sheds more light on general neuro-protective effects delivered by many plants including Brahmi. More and more scientists now propose the use of medicinal plants to treat cognitive disorders, with a focus on their specific ability to effectively penetrate the blood brain barrier. (Ref. 4)

And here is what some authors state in respect of Brahmi's own unique chemicals - bacosides A and B:

Brahmi is also reported to have sedative and tranquilizing effects on dogs, frogs and albino rats. (Ref. 3)

So, having recognized that Bacopa may be able to promote mental clarity and cognitive improvement, deliver neuro-protection and induce calm in those taking it, we are led to conclude that it can also be loosely classified as an adaptogenic food.

Adaptogens are the foods that are believed to aid with the treatment of tiredness and chronic fatigue. They help the immune system to neutralize environmental stress and protect the body from potential mental and physical damage.

To this end, adaptogens can also help to "modulate" the immune system - that is, they may stimulate it if it is underactive, and calm it down if it is overactive.

Some studies suggest that Brahmi can indeed be an effective immuno-modulator. (Ref. 5.)

Therefore, instead of supplying our bodies with a high amount of calories as a source of energy/fuel, Brahmi acts on a more subtle level - it re-tunes our immune systems, removes the feeling of tiredness and re-focuses our minds.

Other studies indicate that Brahmi may also possess anti-inflammatory and wound-healing properties. (Ref. 6)

In respect of more deep-seated conditions such as Alzheimer's and cancer, there is some further excitement in the field of international research.

Any condition caused by neuro-degeneration - ex., Alzheimer's - is notoriously hard to deal with. Some researchers suggest that a selection of nootropic plants, ex. Brahmi and ashwagandha, may be used to treat such conditions. (Ref. 7)

Among other benefits, Brahmi has been shown to work against anxiety and depression (in animals and humans), bronchitis and asthma (in animals), gastric ulcers (in humans), hypothyroidism (in humans), and even showed protection from harmful side effects of certain drugs. (Ref. 8)

This article barely scratches the surface on the topic of Brahmi's health benefits. While scientific literature allows us to get a glimpse into how Bacopa may possibly work, it is most likely the additive/synergistic action of all its compounds working in perfect harmony with each other that produces such positive results.

You may well be surprised to hear that around 80% of people in developing countries use phyto-medicine (i.e., herbs) as a basis for their primary healthcare. (Ref. 4) For centuries, they had intuitively known the true healing value of nature-designed foods and plants, without the need for formal academic research to prove their folklore knowledge.