Many jaguar reserves have been established throughout the range of jaguar presence - in parts of Northern America as well as in Central and South America. We discuss some of the most prominent ones below. 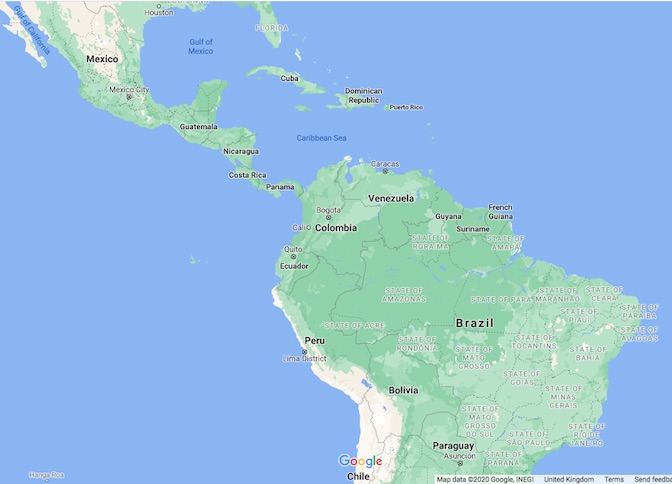 First of all, let's take a quick glance at the map of the jaguar's range.

The jaguar's range spreads from the north of Mexico down to the mid-east of South America (Brazil & Paraguay).

A lot of work is obviously being done for jaguar conservation in these areas.

But it sure is a big challenge, and in order to succeed, conservationists have to take into account many different stakeholders including jaguars themselves and their biological needs, other animals, ranchers as well as local people.

On top of that, conservationists have to take measures to stop illegal logging which is rampant in jaguar ranges and which inevitably leads to their habitat destruction.

The big benefit of jaguar conservation is that preserving jaguars usually leads to conservation of many other animal & plant species in the areas of jaguar presence.

So by trying to "save the jaguar", conservation organizations contribute to the well-being of other creatures as well. This work also helps prevent further biodiversity loss in rainforests and other ecosystems.

It was formally established in the Central American country of Belize in 1986.

Cockscomb is a perfect example of how targeted conservation of just one species - jaguars in our case - also delivers numerous benefits to a wide range of other animals and plants as well as the local ecology and populations.

According to Belize Audubon Society that manages the Cockscomb Preserve, "the area was also designated to protect the upper watersheds of important river systems that deliver ecosystem services to people." (Ref. 1)

Apart from that, being connected in the south to the Bladen Nature Reserve, the Cockscomb Jaguar Preserve creates a continuous corridor of protected areas that jaguars can roam without major disturbances.

In Brazil, a private Jaguar Ecological Reserve in Pantanal demonstrates how eco-tourism can generate income for local people and for jaguar conservation at the same time.

The reserve was founded in 1999 with the help of charity donations, but is currently funded from revenues brought to the area by international eco-tourists.

The reserve boasts rich wildlife which includes, alongside the jaguar, a variety of other animals - birds, mammals, reptiles and so on.

The reserve's owners also put a lot of effort into preserving the Pantaneiro culture such as education for Pantaneiro children.

Northern Jaguar Reserve has been launched in the Sonora state of Mexico, close to the US-Mexico border.

This reserve has a special importance for the following reason.

Until recently, researchers believed that jaguars all but disappeared from the North American regions.

But a small breeding population of 80 to 120 jaguars were identified in the Sonora where it was decided to set up a jaguar protection project.

Jaguar conservation in this area helps protect many other species of animals as well.

The reserve's guardians work closely with local populations to make this project a success for all the stakeholders.

The Jaguar Rescue Center is a truly impressive project which has been set up in Costa Rica by a Spanish couple in 2008.

This reserve is different from other ones. It is a rescue center rather than just an animal reserve.

The staff actively save injured jaguars and other animals from the jungle (many of them attacked by humans), care for them at the center and then release them back into the wild.

The center also purchases tracts of rainforest land as probably the only real method of keeping local rainforests from destruction. They use these forested lands for releasing rehabilitated animals back into the wild as well.

The center offers guided tours to tourists and does a lot of educational work with the local community.

You can find out more about the Jaguar Rescue Center here.

The reserves I highlighted above do their best to protect jaguars from potential endangerment in the future.

They, of course, try to get all the interested parties involved in their work.

Most reserves also support jaguar research efforts and work with a number of charities to spread the knowledge about these charismatic animals.

For which they should certainly be applauded.