Tropical frogs belong to the animal class of amphibians and make up about 88% of all amphibian species. (Ref. 1) 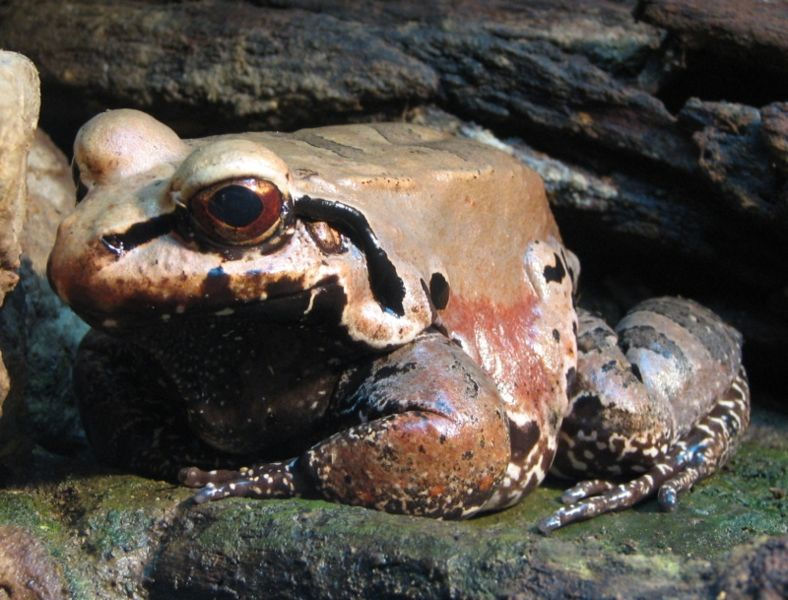 They form a very important part of our ecological system.

Most of more than 5,000 known species of frogs live in tropical rainforests (Ref. 2) (that must be why they are referred to as tropical frogs!).

The tropical areas of Latin America and West Africa are the places with highest global diversity of amphibians. Brazil has the biggest number of amphibian species (751) of all other countries in the world followed by Colombia (697) and Ecuador (447). (Ref. 3)

Tropical frogs are such a diverse group of animals that every now and then we hear about discoveries of their new species in different parts of the world.

It's not difficult to realise that we probably still don't know a lot about them.

See the Facts About Frogs summary here for more details. 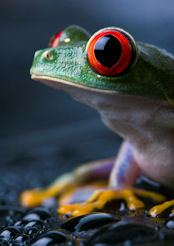 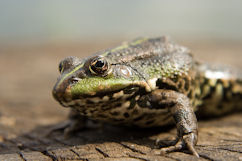 
Tropical frogs are specialised animals and are very sensitive to changes in their environment.

Quite often they can only live in specific habitats and depend on them for their survival.

For example, even in the same ecosystem - such as a high-elevation tropical forest of Monteverde in Costa Rica - populations of frogs living in stream habitats can be negatively affected by a number of changes in their environment, whereas frogs living in other habitats such as bromeliad plants seem to be doing fine. (Ref. 4)

Researchers in Brazil found that poison dart frogs highly depend on rain-filled Brazil nut pods (which serve as the frogs' habitats) to survive the tadpole stage in their lifecycle. (Ref. 5)

Just imagine what may happen to these frogs if suddenly Brazil nut pods disappear from their environment.

Bromeliad plants seem to be another popular habitat for rainforest frogs. They use water-filled bromeliads for keeping their tadpoles in until they metamorphose into young adults. (Ref. 6)

Leaf litter is also a very good example of tropical frogs' habitats. It is not only a fantastic shelter for them but also a source of food (for example, the insects decomposing the litter). (Ref. 7)

As Ashley Mattoon points out in his World Watch article, the fact that amphibians are partly aquatic and partly terrestrial makes them doubly vulnerable. (Ref. 8) It means that problems with either water or land can affect them negatively.

So obviously the healthy state of the frogs' habitat is of utmost importance to them, and rainforest destruction is one of the major causes of recent amphibian declines.

Apart from that, global warming is another major cause of frogs' habitat loss leading to recently documented extinctions of some amphibian species.

Another major weakness for frogs is a low level of external protection that their skin can provide them with. Since their skin is so permeable, there is a big chance that more toxins from the environment can enter the bloodstream and cause harm.

These tropical animals play a very important role in ecosystems that they belong to. For example, they consume large quantities of insects and other prey, and in turn they are consumed by other animals, in endless food webs of rainforests.

Ashley Mattoon gives us an excellent description of this:

"...in some temperate and tropical forests, amphibians account for more biomass than any other vertebrate group: if you could weigh all the frogs and toads in a forest, there's a good chance you would find more mass in them than in the forest's reptiles, birds, or mammals.

That's important because it means that a great deal of the nutrients and energy in these places normally passes through or resides in amphibians. In ways large and small, amphibians shape the ecosystems of which they form a part.

In ponds, for example, tadpoles may keep algal growth in check. Remove the tadpoles and you may end up with an oxygen-depleting algal bloom. Adult frogs and toads often devour vast quantities of invertebrates, especially insects.

Large frog and toad species also eat fish, birds, and even small mammals. In some wetlands, amphibians are the top predators, exerting enormous influence on the diversity and abundance of other organisms.

And of course, amphibians are themselves important prey for many other animals, including fish, birds, reptiles, and mammals. Some bats and snakes live exclusively on amphibians; their fate will mirror that of their prey." (Ref. 9)

Frogs' Sensitivity to Changes in Environment

Tropical frogs are probably one of the most sensitive animals in the world and react very rapidly to substantial changes in their environments. They also form vital parts of the ecosystems they belong to.

Just because they are such vital chains in the ecosystems they belong to, and due to their overall sensitivity, frogs are considered an indicator species - the species that can act as "a bellwether for environmental change" (Ref. 10) , or the change in an ecosystem's health.

In other words, they "indicate" the state of the health of their ecosystems.

The "indication" for us humans to note here is that such environmental change affecting the tropical frogs can also affect many other species of animals including ourselves.

For example, it has been recently suggested that some frog populations of La Selva rainforest in Costa Rica declined due to the lack of leaf litter - frogs' important habitat - on the forest floor. This may have happened because of the warmer and wetter conditions observed in recent times which could have negatively affected rates of litter fall and its decomposition. (Ref. 11) Therefore, this disappearance of frogs may indicate, though indirectly, the change in climatic conditions in this particular geographical region, or perhaps on a global scale as well.

I guess we could also assume, that this situation indicates the potential negative effects that may take place in this specific ecosystem of La Selva forest.

For instance, frogs' disappearance could cause loss of control over some populations of insects and could let them grow in numbers, or it could be the cause of reduction in the quantity of food for other forest animals feeding on frogs etc.