Rainforest animals form an integral part of tropical forests which contain the highest levels of biodiversity (a number and variety of species in a habitat) in the world: about half of all the animal and plant species. (Ref. 1)

It is difficult to imagine rainforests without animals in them!

Rainforests are very complex ecosystems. They provide an environment for endless interactions / food webs between animals, plants and other living organisms (such as fungi, for example), many of which heavily depend on each other.

Animal diversity is so rich in rainforests because they are a perfect home providing perfect conditions (such as abundance of rainfall and warm temperatures throughout the year) to thousands of different life forms that may not survive in other, harsher parts of our planet.

There are around 1.5 mln classified animal species in the world. (Ref. 2)

Invertebrates are the most numerous animals and make up 95% of all the species (ref. 3), with insects alone being the largest invertebrate animal group (900,000 species (ref. 4)).

However, it is the vertebrate animals (around 41,000 species (ref. 5)) that we know most about and that have been studied in a lot more detail.

Take the total number of classified animal species mentioned above (1.5 mln), divide it by 2 (because tropical forests contain at least half of all the Earth's species), and you will get 750,000 species - a very roughly quantified estimation of animal diversity in the tropics (though we wouldn't attach too much meaning to this figure). 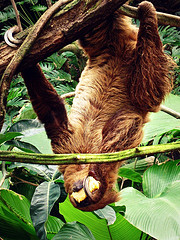 There are thousands and thousands of fascinating tropical animals that we could talk about endlessly.

In rainforests, you can find animals of virtually any color and size (from the tiny strawberry poison dart frog to the huge elephant).

Some animal species are expected to live in all rainforests (such as pigeons) whereas others live only in certain tropical areas – these are called “endemic” species (birds of paradise, for example, are found only in New Guinea and Australia). (Ref. 6)

Feel free to browse this website and learn more about many charismatic tropical creatures.

Endangered Animals of the Rainforests

Unfortunately, the most recent rates of human development led to the destruction of the rainforest habitat for many animals.

Rainforest destruction is probably the main cause of biodiversity loss.

But rainforest degradation as a habitat for animals (by way of environmental pollution, for example) is also a problem, albeit a less obvious one.

There are also other factors posing serious threats to the survival of many animal species (such as poaching).

As a result, we have witnessed a sharp increase in the number of endangered animals in most tropical forests of the world.

In extreme cases, such disregard for animal welfare led to animal extinction.

Such a situation is highlighting the real need for endangered species conservation.

And we are currently witnessing many efforts to reverse this process of losing tropical biodiversity (ex., see how this is being done with jaguar conservation).