The idea of Panama Canal construction had probably been one of the most experimental and risky approaches to "taming the nature" that this world has ever seen. 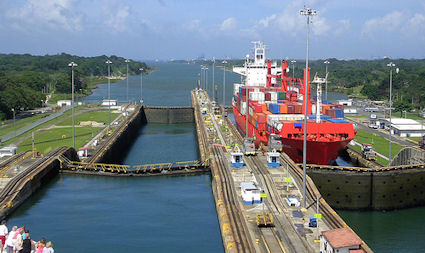 You can hear it everywhere being called one of the world's greatest engineering feats. But it's also been called "greatest liberty ever taken with nature". (Ref. 1)

The Panama Canal construction connected the Pacific and Atlantic oceans through the isthmus of Panama. The Canal now facilitates sea travel between different parts of the world.

Let's see how this grandiose project was implemented and what ecological consequences followed it.


The Panama Canal Construction - How It Was Done

Originally, tropical rainforests and hills covered the area where the Panama Canal was built by 1914. The fate of this area (and all its populations, as well as plants and animals) had been sealed when it was finally decided to connect the two oceans at this geographical point for easier transport.

At some point during the Panama Canal construction it became clear that the sea-level implementation was not possible, and so the project sponsors decided to build a high-level canal (that is, above the sea level).

The project planners then had to find a way to fill this area above the sea with water. They found such a good opportunity in the Chagres River which they used to build a dam.

The dam flooded a massive area close to the river, and thus helped create the Gatun Lake which now forms the main part of the canal. And as the lake was formed, many hilltops became islands, the biggest and best known of which is Barro Colorado Island. (Ref. 2) Apparently you can still see the stumps of old mahogany trees rising from the water which can even become a hazard for vessels. (Ref. 3)

Since the canal is above the sea level, it needs an effective transit mechanism that would lift and lower the vessels as they pass along the waterway. This mechanism comes in a system of locks which work at several stages of the canal's length, and do just that - lift and lower the ships.

In order to operate properly, the canal has to use vast amounts of water, which is collected during the rain season. The Gatun Lake is also very important as a water source for the canal's operation during the dry season.

Another major environmental issue during the Panama Canal construction was the digging of the Culebra (Gaillard) Cut through the Continental Divide. This involved excavation of many millions of cubic meters of soil and dumping a large proportion of it elsewhere.


The Panama Canal - The Business Case

The business case for the Panama Canal construction is very clear. First and foremost, the Canal generates savings of many thousands of kilometres for the ships travelling from one destination to another. This saves a lot of time. Below are just a few examples: 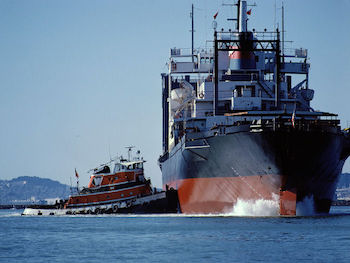 Cargo ships save thousands of kilometers in their journeys.

Of course, this all also means the income generated specifically for the country of Panama and its people. Panama is highly dependant on the operation of the Panama Canal. The Canal is really "a barometer of world trade" (ref. 7) - its traffic rises in times of economic growth and falls in times of recession. This will bring fluctuations in revenue respectively.

As the expansion of the Canal has now been approved, the environmental impact of this mega project (such as salinization of fresh water (ref. 8)) will once again come to the fore.


What about the environmental case?

If you dig a little bit further into the environmental literature you'll start getting an alternative feel for the whole concept of "the two oceans getting connected". We have heard a lot about the human cost of the Panama Canal construction. For example, we know that more than 27,000 workers had died during the construction. (Ref. 9)

But what about the environmental price of this enterprise? We approximately know the area of pristine undisturbed Panama rainforest that went underwater.

We can imagine that many people were driven out of their land and displaced (apparently up 50,000 people were affected during the original Panama Canal construction (ref. 10)). But we do not know how many species of rainforest animals and plants went extinct as a result of the Panama Canal construction. And we do not know the sheer volume of biomass that was lost as a result of this rainforest desruction.

Even to an untrained eye, it may look like one of the biggest experiments on the rainforests ever. I will illustrate it in a series of quotes below:

"In 1914 the gigantic, newly completed Panama Canal stood as the embodiment of the American venture of speculation, technocracy, consumption, and strategic power in the tropics. ... Filling and then emptying the locks required immense amounts of water, so the engineers dammed the Chagres River to create Gatun Lake, turning peninsulas into islands and eliminating rainforest and rural communities from entire valleys and mountainsides. They transformed an entire region of tropical Panama to meet the requirements of a global network of trade and security ..." (Ref. 11)

"This gigantic undertaking [Panama Canal], involving the destruction of formerly unbroken forest and the creation of Gatun Lake, approximately 164 sq. mi. in area, along a transcontinental belt has had a profound effect on the local fauna and flora. ... The impounding of the waters of the Chagres River to form Gatun Lake in an interior basin, and the diversion in this way of Atlantic drainage to the Pacific through the canal has brought about marked changes in water relations on the Isthmus. The rising waters of Gatun Lake destroyed the forest and permitted the extension of many aquatic species into a new area where the development of stable associational relations may be expected to require considerable time." (Ref. 12)

"The original canal, completed after more than 20 years' struggle, did not so much impact on the environment as change it forever. Mountains were moved, the land bridge between the north and south American continents was severed, and more than 150 sq miles of jungle was submerged under a new manmade lake. To defeat deadly mosquitoes, hundreds of square miles of what we would now call "vital wetlands" were drained and filled, and vast areas poisoned or smothered in thousands of gallons of crude oil." (Ref. 13)

"... the onslaught of the industrial age, which began with the building of the Panama Railroad and was accentuated by the digging of the Panama Canal, has accelerated sharply in the last 40 years. ... its [Panama's] land is being cleared more rapidly, than ever before, to the point that one wonders how any forest can possibly be spared. This onslaught has affected Barro Colorado in many ways, and is still doing so. ... By 1923, moreover, spider monkeys and jaguars were already absent from Barro Colorado ..., although a jaguar was seen there in January 1983, and another in January 1993. ... The isolation, completed by 1914, of Barro Colorado Island from mainland Panama by the waters of Gatun Lake, accelerated extinction on this island because populations threatened by local extinction were now much less likely to be reinforced or reestablished by colonists from elsewhere. ... White-lipped peccaries, and various smaller mammals, birds, amphibians, and reptiles have disappeared from Barro Colorado during the last 60 years ... . ... The isolation of Barro Colorado and the destruction of much of the forest on the surrounding mainland may have eliminated or seriously diminished populations of some animals that migrate seasonally within Panama, such as the day-flying moth Urania fulgens ... ." (Ref. 14)

An interesting point to re-emphasize here is that the Panama Canal construction doubtlessly caused horrendous pristine rainforest destruction in the first place.

But it also fragmented the remaining forests into smaller parts. And this fragmentation had a negative effect on the welfare of many migrating species (for example, jaguars).

Water is probably the most important resource for the functioning of the Panama Canal. Though the Canal uses water generated by annual rainfall, the seasonality of this rainfall means that some amounts of water need to be stored elsewhere and used during the dry season. (Ref. 15) The Gatun Lake is a good storage of water for these purposes.

The rainforest has always been there to perform its traditional function - to absorb the rain and then release it back into the lake at a steady rate and thus replenish the lake's water resources. (Ref. 16) But deforestation is now posing a serious threat to the Panama Canal's water balance.

Loss of water is one result of deforestation. The lack of vegetation that would normally have absorbed the rain water causes rains to flow down the deforested slopes (with easily eroded soils), quickly into the Gatun Lake, and the excess from there is spilt out into the ocean. (Ref. 17) And this situation results in a shortage of water for use in dry season.

Silting is another issue. Heavy rains "wash away" the soils of deforested land areas straight into the Gatun Lake. And this situation results in the lake being silted. (Ref. 18)

Floods may be yet another problem. Though it is widely assumed that deforestation is a common cause of floods, both in Panama and other countries, this belief has been challenged by a number of experts. (Ref. 19)

It is no real surprise that the original Panama Canal construction as a project of such enormous proportions caused so much environmental damage. There is no doubt it brings in valuable income to the Panamanian government (though there is doubt about how this income is distributed - Panama has high poverty levels and is still plagued by corruption).

But, as the country has launched its Canal expansion project ("Third Set of Locks Project") to accommodate for larger vessels, environmental concerns should certainly not be underestimated. And the consequences of the original Panama Canal construction should not be forgotten.

The risk here is that, if the environmental issues are not properly addressed, this expansion may well do more damage than good.