Surprise surprise ... humans are not the only intelligent race inhabiting this planet, regardless of how we may like to define the term intelligence as such. 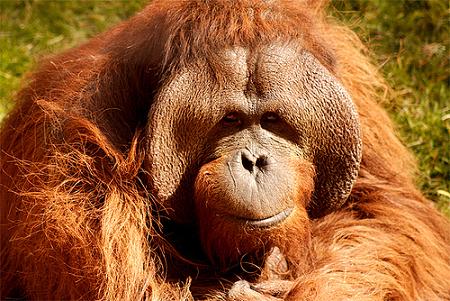 Do orangutans possess intelligence as well by any chance?

Intelligence as we understand it, is predominantly a social attribute. In other words, it is developed at its most among the species whose representatives initiate some sort of social interactions between themselves and learn life skills from each other and along each other.

Even though these rainforest animals are semi-solitary, they do develop different forms of social contact at different stages of their lives, which may help them find better solutions to the challenges they encounter.

Indeed, during the last several centuries orangutans had amazed the international scientific community with their impressive, human-like mental abilities allowing them to adapt to their environment, learn new life skills, plan their actions ahead and solve other everyday problems.

Let us look at specific mental abilities attributed to orangutans.

Imitation by one individual of actions of another individual(s) is probably the first indicator of intelligence of a certain species.

In case with orangutans, we don't need to go far for the proof of their ability to copy actions, ex. even human actions.

Here are some of the recorded examples of orangutans copying human actions (ref. 1) :

Author Richard R. Byrne reports that these animals can copy some other, more complex human actions as well.

One example of that is making a hammock.

An orangutan was seen "tying a hammock between two trees by winding the rope round each tree several times, then threading it through a metal ring on the hammock, finally winding it round the hammock sling itself". (Ref. 2)

Another example is trying to start a fire.

A female orangutan "picked up a stick from the dying fire and blew on the hot end several times until it glowed, then removed the lid from a can and scooped up some of the liquid [paraffin] with a small cup, finally dipping the stick in the cup and fanned the stick repeatedly with the lid. This was unsuccessful, but she persevered and by the fifth stick she had produced billowing smoke from her little pile of damp sticks." (Ref. 3)

It is interesting to note that some of these animals would repeat the same action several times in their attempts to succeed, if they failed the first time around leading us to conclude that "imitation requires a mental, symbolic representation of the desired result in advance of its achievement". (Ref. 4)

Insight goes further than imitation and provides a stronger indication whether real intelligence is present in an animal species, specifically in great apes.

Insight learning involves some sort of understanding why a problem exists and how it can be solved.

So, an animal does not necessarily imitate another individual's actions but arrives at its own solution to a challenge that it is trying to deal with.

This may happen as a result of the animal's past experiences. (Ref. 5)

As an example, having played with a certain object (ex., a stick or a leaf) many times before the animal may suddenly realize that this object can be used as a tool to achieve a goal which may be anything from getting food to protecting himself from the rain.

Orangutans can certainly use and manufacture tools for achieving better results. Below is an example of an orangutan's ability to make stone tools:

A researcher "first allowed a 5½-year-old orang-utan, Abang, to learn how to cut a cord with a stone flake in order to open a box for a food reward.

[The researcher] repeatedly demonstrated sawing through the cord, and there is now independent evidence that an orang-utan should be able to impersonate an action ... ; but sawing is an action that orang-utans use naturally and Abang may simply have acquired the knack by trial and error.

Once he was proficient, Abang was instead given only a flint core and a hammerstone.

The technique, used by early man to 'knap' flint, was demonstrated for him: striking the core in a certain way causes a flake to be split off. To make this task, which even people do not find easy to copy, a little easier for him, the core was fixed down to a board with a leather strap and a base of modelling clay.

In early trials, the tiny chips Abang managed to detach were too small to use as tools, but he did try several times to use them on the cord.

After seven demonstrations, and 1½ hours of cumulative exposure to the task, Abang succeeded in striking off a flint flake; he failed to cut the cord with this flake, but by then he had the idea and after a couple more flakes he was able to get to the food.

While Abang's performance may not have depended on impersonation, it shows clearly that he was capable of organizing the complex task, program-level imitation." (Ref. 6)

In this example, the orangutan did not simply try to copy human actions without understanding his own reasons for doing so, and the process for achieving his desired results. 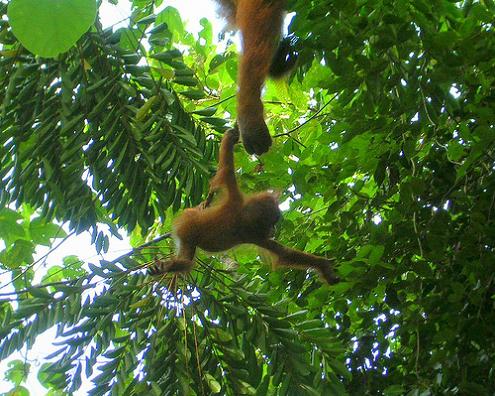 He knew that he needed to cut the cord to open the box with food.

He also knew why he was unable to do so and made several attempts to cut the cord with different flakes until he finally succeeded.

We further discuss orangutans' tool use below.

Teaching may be another form of intelligence in orangutans.

There is no certain evidence that these animals teach their offspring different techniques. (Ref. 7)

Still, we know that mothers show their infants how to build nests.

Also, they don't allow their infants to consume foods which are normally not part of orangutans diet. (Ref. 8) This possibly teaches the infants which potentially harmful foods they should avoid in the future.

Guided by the fact that self-awareness is an indicator of a certain level of intelligence, researchers usually use a mirror test as an instrument to understand whether animals are aware of themselves.

Orangutans have passed this test.

First, they are given a chance to get used to mirrors and seeing their own reflections in them. Their faces are then marked with paint and they are given mirrors again to see if they find something unusual on their faces, which they do. Right after noticing paint spots on their faces, they immediately reach and touch them, just like we do. (Ref. 9)

This means that they are aware of their own physical presence.

So why do we use self-awareness as a measure of intelligence?

We do so because we assume that animals that are aware of themselves may also have a better, more conscious understanding of the world around them.

In other words, if they are aware of their own existence, they may also perhaps imagine themselves as separate entities within their own environment as well as in relation to other individuals inhabiting this environment.

We mentioned above that imitation and insight learning, specifically via play with objects, may lead to tool use by orang utans and help them achieve better results.

There are many good examples that demonstrate how efficient these animals may be at using and manufacturing tools.

As for tool manufacture, wild orangutans can: (ref. 11)

and captive orangutans can: (ref. 12)

It is mostly Sumatran populations that use tools; this behavior is rarely seen among Bornean populations. (Ref. 13) 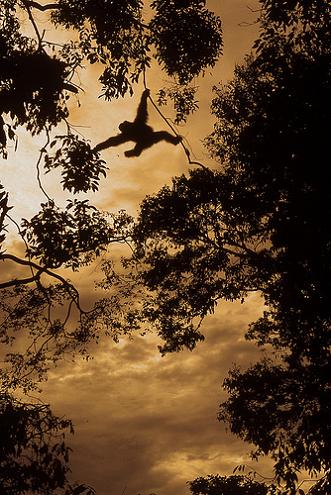 Traveling around the forest and obtaining food is the main activity that orang utans engage in during the daytime.

Some time ago it was suggested that they develop cognitive maps - memorized knowledge of their habitats - and use them for travel. (Ref. 14)

They travel by swinging and often use the back-and-forth oscillation of the tree until they can catch another tree.

Deciding and following a potential route through a multitude of trees is a very difficult task. This is especially true for males who are quite heavy - the choice of a wrong tree would result in a fall and serious injury. (Ref. 15)

So to be successful in their travels they need to take the right decisions about which trees to use and which ones to avoid.

This points to their ability to plan ahead.

Famous male orang utan Chantek, who was raised in captivity in the US, is well known for his ability to deceive in order to get a personal benefit.

On one occasion he stole food from a researcher's pocket while pulling her hand in the opposite direction. (Ref. 16)

In another instance he signed DIRTY in sign language to get into the bathroom to play with the washing machine, dryer etc instead of using the toilet. (Ref. 17)

With the reference to all the mental abilities that we discuss above, the next logical question is: can orangutans think?

Within this context, we assume that if orangutans can use and make tools, plan their travel, deceive and teach (and perhaps perform many other "intelligent" tasks that we currently have no knowledge of) they can mentally simulate these physical actions.

If mental simulation means thinking, we conclude that orangutans can think in their own limited way. (Ref. 19)

Finally, language is probably one of the strongest indicators of intelligence _ one's ability to understand and respond to the outside world in a meaningful way.

It has been shown these endangered animals can effectively learn to use the sign language.

For example, the already-mentioned Chantek has a vocabulary of several hundred signs and understands spoken English and American Sign Language. He can even invent signs of his own. (Ref. 20)

It is obvious that orangutans are capable learners.

Birute Galdikas says that they can learn how to use language at the level of a 3-year-old child. (Ref. 21)