Mountain gorillas (Gorilla Beringei Beringei) have probably gained more publicity around the world than any other gorillas species, mainly thanks to their popularisation by the legendary Dian Fossey from the 1970s onwards. 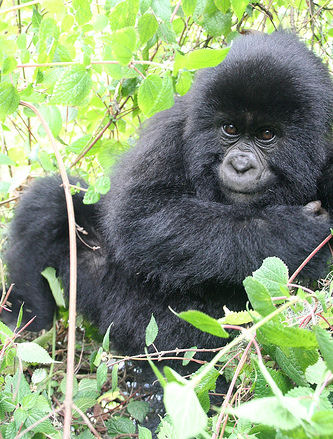 The plight of these animals prompted many bright minds, both locally in Africa and internationally, to start rethinking human attitudes towards the nature in general, and animals as closely related to the human race as gorillas, in particular.

The conservation program for gorillas that followed has proven to be quite successful, at least in halting the total demise of these animals. It is now promoted as a model of conservation for other endangered animals.

These animals live in Eastern – Central Africa in the montane tropical forests of three countries: Rwanda, Uganda and the Democratic Republic of the Congo (DRC).

According to one source, the total number of these great apes left in the wild is estimated at around 600 – 640 individuals. (Ref. 1) There are many other sources quoting a similar number.

Experts identify two distinct equal-sized subpopulations of this gorilla species which have been separated for around 1,000 years due to their forest habitat clearance for agricultural use. (Ref. 2)

One subpopulation inhabits the Virunga Mountains in Rwanda, Uganda and DRC; another is located in Bwindi Impenetrable Forest in Uganda.

Because of such low population numbers these animals are considered amongst the rarest apes in the world.

Ruth Keesling shares this fascinating description of mountain gorillas with us: 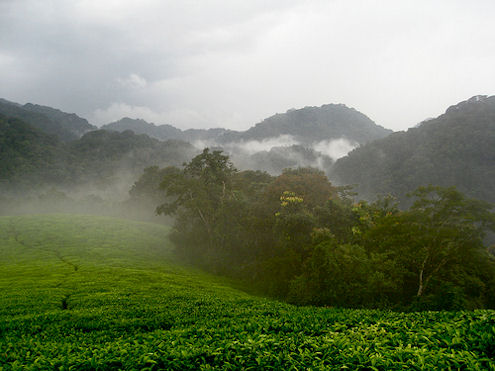 With the mountain gorillas, we meet a remarkable species that captures the heart of those who spend time with them.

Unlike the more common lowland gorillas of western Africa, which tend to be solitary, the mountain gorillas generally live in harmonious groups. They make their home in the few remaining mountain forests of central Africa, at altitudes ranging between 8,000 and 10,000 feet.

Unlike the lowland gorillas, which survive in zoos, the mountain gorillas have always died early if taken into captivity. …

These peaceful vegetarians are a miracle to behold. I observed a mischievous baby tumble around playfully while his mother watched protectively. Although gorillas are often thought to be "slow" or "dumb" because of their sluggishness, their behavior belies that image. Scientific studies have verified that they are intelligent and capable of learning sign language. …

Mountain gorillas wander around a home range of up to 15 square miles and spend about one-third of their time foraging. Their main foods include bamboo shoots, giant thistles, and wild celery, supplemented by diverse fruits, leaves, roots, tree barks, insects, and worms. When they are not foraging, the gorillas divide their time between travelling and sleeping. …

At noon and night they make nests, with the lighter ones constructing beds of bent branches in trees, and heavier individuals tending to nest in grasses on the ground. Babies snuggle with their mothers for the night.

Although they are large and powerful, mountain gorillas are also gentle and affectionate. Sadly, global miseducation conveyed through movies such as King Kong and Congo has portrayed them as dangerous.

What a contrast to that image is presented by their easygoing, peaceful, playful lives. Large males patiently allow young gorillas to climb all over them without a murmur of protest, and they are not aggressive toward humans unless they are threatened. (Ref. 6)

Though, as Ruth Keesling mentions above, gorillas wouldn’t strike you as clever animals at first sight, it is a misconception and many authors do single out their amazing intelligence in respect of interactions with their environment.

Gorillas can communicate not only by making calls (such as grunts and roars), but also by sign language which has been proven in case with Koko the gorilla. Gorillas have passed a “self-awareness” test and have been recently discovered to use tools for problem-solving.

This species shares the same threats to their survival as other gorilla species.

However, there are also unique threats to mountain gorillas faced by possibly no other endangered animal.

Like many other animals, rainforest gorillas’ habitats are under constant pressure from developers, including logging companies as well as poor farmers using charcoal for fuel.

In spite of all the work that’s been done in the area for years by national and international organisations, this threat persists and will most likely remain a big factor in the gorillas’ survival well into the future.

Poaching of these apes for food (“bushmeat”), medicine and trophies is currently probably the most serious threat faced by gorillas.

Sometimes, very sad to say, gorillas are killed for no apparent reason, with the bodies left at the scene (otherwise poachers would have taken the bodies and sold them). Conservationists call such murders “executions” (ref. 7) and consider such incidents as attempts to crush conservation efforts in the region.

It’s a widely acknowledged fact that mountain gorillas are very susceptible to human viruses, and they have been found to contract such diseases as measles, scabies, the flu (ref. 8) and salmonella-related conditions (Ref. 9).

Experts note that contaminated water and sanitation problems in Africa also contribute significantly to the spreading of hepatitis A and B, herpes, intestinal worms etc among great apes. (Ref. 10)

As a result of their susceptibility to disease, loss of genetic fitness has been mentioned as another threatening factor. (Ref. 11)

Perhaps like no other animals, representatives of this particular species have become unwilling hostages to the military conflicts that have been taking place in Central Africa for many years.

For example, there are reports that 2 mountain gorillas were killed by landmines and 13 others died as a direct consequence of military conflicts in Rwanda during the 1990s. (Ref. 12)

Unfortunately, armed conflicts taking place between different military factions in the areas inhabited by gorillas are an ongoing problem.

In the most recent (2007) wave of attacks on the gorillas 10 of them were shot to death with no apparent reason. (Ref. 13) It is suspected that armed rebels executed the attacks in the hope of thwarting conservation efforts. (This is the same example as described in the Hunting / Poaching section above).

Many authors agree that the gorilla conservation program that was initiated in the region during the 1970s – 1980s, has been generally successful in several different ways.

Thanks to the relative success of the conservation program that included such crucial components as: (Ref. 15)

the numbers of gorillas in the wild have significantly increased by the start of the 21st century.

Perhaps another significant achievement of this conservation program is bringing together the three nations which are homes to this gorilla species. The success would probably not have been possible without co-operation and desire to overcome each other’s differences.

With such a small number of mountain gorillas left, it will be very difficult to ensure their survival and thriving for the future.

There are many serious threats these animals have to deal with on a daily basis. It is very unlikely that these threats can be eliminated within a year or two.

Many people now admit that, to achieve success in any future conservation efforts, program implementers will have to take into account all the stakeholders involved, including both animals and humans.

Humans (in particular, those living in very close proximity to gorillas) are very important to the conservation success. Most of them have no choice but to widely use rainforest resources in an unsustainable manner.

Therefore, one of the aims of future conservation efforts should be alleviation of poverty, at least in the areas surrounding gorillas’ habitats.

To alleviate poverty, projects such as ecotourism (which is already widely used) can certainly bring some financial stability to the conservation efforts in general, and directly to the employees.

Another idea is bringing to market some products, such as coffee, that can create sustainable jobs and help lift the incredible pressure on the gorillas’ rainforest habitats.

For example, the Gorilla Fund Coffee is a fair trade certified coffee produced by over 2,000 Hutu and Tutsi farmers. The project for this coffee production not only helps heal the scars left by the 1994 genocide in Rwanda, but also helps promote an alternative to poaching and logging. (Ref. 16)

There are other coffee blends on the market promoted for the aims of mountain gorilla conservation.

If projects like prove to be successful in the longer-term, then there is at least some hope and the mountain gorilla survival can also be secured.

9. Frank, A. K. (August/September, 2002). CAUGHT IN THE CROSSFIRE - Warfare Is Only One of Many Threats Driving the World's Great Apes toward Extinction. National Wildlife. Retrieved January 25, 2008 from Questia.com