Because of gorillas’ similarity to our own species, many people recognize the right of existence of individual gorillas as second only (or in some cases, equal) to that of humans. ~ A. L. Vedder & W. Weber (Ref. 1) 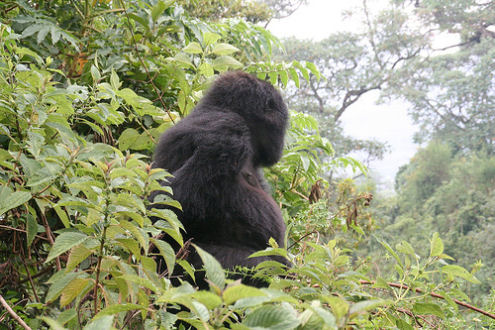 Gorilla conservation efforts have already achieved a lot of success in the process of helping this critically endangered species on their road to recovery. But much more still needs to be done.

We know quite well that habitat loss as well as hunting (poaching), diseases and military conflicts are currently the most common threats faced by gorillas in their daily fights for survival. (More discussion on the threats in the Endangered Gorillas article).

These are the issues that are, naturally, targeted by local governmental and international organisations.

Additionally, there are unique challenges to gorilla conservation such as very low reproductive rates of these endangered animals, which make conservation work even more difficult.

Over the years mountain gorillas, as the rarest of all gorillas, have probably been the most studied and the most famous species.

The mountain gorilla conservation program has been quite successful and has been touted as a model for conservation in other parts of Africa.

But in spite of the attention that mountain gorillas attract in terms of funding by conservation organisations and coverage by international media, we have seen some interesting actions taking place in the field of western lowland gorilla conservation as well.

Mountain gorillas inhabit the eastern central part of Africa, and their current estimated number in the wild is around 600 – 640 individuals.

The most common threats faced by mountain gorillas are habitat loss, commercial hunting for bushmeat trade, diseases and ongoing military conflicts. For more details on these threats, visit the Mountain Gorillas article.

In this sense, mountain gorilla conservation certainly carries a lot of weight for the whole rainforest community that shares their space with gorillas.

The fact that mountain gorillas don’t survive in captivity (they always die early) makes conservation of these animals in the wild even more important.

The conservation program that was introduced during the 1970s – 1980s, spans several areas: (Ref. 3)

A combination of all these measures succeeded in at least stemming the total demise of mountain gorillas.

Living in these parks protects gorillas from potential clearances of rainforest for agricultural land by small-plot farmers who inhabit the areas around these parks.

The general principles of this program have been applied in different forms in other countries, in particular in DRC, Uganda, Gabon, and Central African Republic. (Ref. 4)

Western lowland gorillas inhabit the tropical rainforests of the central western part of Africa, including Angola, Cameroon, Central African Republic, Congo, Equatorial Guinea, Gabon, Nigeria and, possibly, DRC. Their current estimated number is around 95,000 individuals (in reality, this number is most likely to be much lower).

Though western gorillas attracted in general less attention than mountain gorillas, the Ebola virus that recently decimated large numbers of these animals brought it home to everyone just how vulnerable western gorillas are, too.

In addition to the Ebola virus, the second most serious threat to western gorillas is commercial hunting for bushmeat trade (aka poaching).

Wildlife Conservation Society (WCS), a prominent US-based conservation organisation, is one of the most active organisations in the western Central African region in the field of western gorilla conservation. WCS works closely with governmental institutions, indigenous groups, the private sector and international partners alike.

Within this coalition of different stakeholders, WCS attempts to apply a comprehensive approach to conserving western gorillas.

It is probably early to assess the results of this work. But the scope of this approach and involvement of most stakeholders do give us hope about the future of western lowland gorillas.

As gorilla conservation seems to be such a complex and multi-faceted issue and the threats that gorillas face seem insurmountable, the long-term prospects for the welfare of these animals may also look grim.

And quite often even successful projects come literally under fire.

In spite of that, it’s very uplifting to hear good news as well.

For example, in 2006 we heard of the very first western lowland female baby gorilla being born at Bristol Zoo Gardens (UK) after the baby’s mother underwent fertility treatment. (Ref. 6)

It looks like one of the keys to conservation of gorillas is to secure better economic and social conditions for people living in close proximity to these animals. Another one is further development and improvement of existing veterinary programs for managing gorillas’ health.

As long as everyone keeps their focus and determination going, the hope is still there.