Warming of the climate system is unequivocal, as is now evident from observations of increases in global average air and ocean temperatures, widespread melting of snow and ice and rising global average sea level.
~ IPCC Climate Change 2007 Report (Ref. 1)

The Science of Global Warming

Global warming is quite a recent phenomenon that came to international prominence only by the end of the 20th century.

But man-made pollution was known to affect the climate system of the planet as long ago as the middle – end of the 19th century.

It was first suggested in 1863 that changes in the composition of the atmosphere due to pollution could lead to climate change. In 1896 the Swedish scientist Svante Arrhenius made first actual calculations of the effect of greenhouse warming in which he estimated that a doubling of carbon dioxide [in the atmosphere] would increase the global average temperature by 4 ° C to 6 ° C. (Ref. 2)

As a general guidance, we identify the following three main indicators of global warming:

Scientists estimated that, since the late 19th century there was a real (though irregular) increase in the global surface temperature.

The decline of the temperature during the post-World War II period may have been due to the masking of global warming by aerosols. (Ref. 4)

There is no reasonable doubt that during the last couple of decades the planet witnessed some of the hottest years on record.

By middle 1980s, there was a wide appreciation of the global warming phenomenon and potential dangers it was posing to the planet.

During that time, the international community came together to establish an institutional framework that would provide space for further research and development of policy recommendations for managing this issue.

The Intergovernmental Panel on Climate Change (IPCC), a scientific body, was established by the United Nations in 1988 for the purposes of evaluating the risk of climate change caused by human activities. It does not carry out research as such, but bases its assessments on peer reviewed and published scientific literature. In 2007, the IPCC and Al Gore, former US Vice President, shared the Nobel Peace Prize for their work towards promoting the awareness of climate change. (Ref. 7)

United Nations Framework Convention on Climate Change (UNFCCC) is a non-binding treaty aimed at “stabilization of greenhouse gas concentrations in the atmosphere at a level that would prevent dangerous anthropogenic interference with the climate system”. The UNFCCC was a product of the Earth Summit held in Rio de Janeiro in 1992. (Ref. 8)

Kyoto Protocol , adopted in 1997, is a follow-up agreement to the UNFCCC. Kyoto Protocol sets out mandatory requirements for signatories to reduce greenhouse gas emissions to certain levels, with 1990 as the base year. (Ref. 9)

The sea level rise is consistent with the temperature rise and general warming tendency.

Loss of snow cover has been another indicator of climate change. Snow cover in the Northern Hemisphere declined by 4% between 1920 and 2005. (Ref. 12)

The decrease in snow cover has also been consistent with the general warming trend.


The Science of Global Warming

In order to understand the mechanics of global warming, let’s see how the Earth is “powered” by the Sun (through solar radiation), how the energy (radiation) between these two entities is continuously recycled, and how this cycle maintains the equilibrium temperature of the Earth.

Thus, for a certain amount of radiation being exchanged with the Sun the Earth will achieve a certain equilibrium temperature.

Experts point out that for the Earth as a whole, the equilibrium “radiative” temperature (i.e. the temperature required to reradiate all the energy received from the Sun) at the outside of the atmosphere is −18°C. So if the Earth’s atmosphere was totally transparent to all wavelengths of radiation, then the average temperature at the surface of the planet would also be −18°C [making it most likely uninhabitable]. (Ref. 15)

But thankfully, during the last step of the radiation cycle described above – when the Earth re-radiates solar energy back into space in the longwave form, the atmosphere absorbs (“traps”) some of this upward-going longwave energy.

The atmosphere then emits longwave radiation in all directions. Some of this radiation will go back down towards the Earth adding to the original shortwave solar radiation received by the planet.

This added amount of radiation raises the Earth’s equilibrium temperature [to around +15°C] and makes life as we know it possible on our planet. (Ref. 16)

Therefore, the process of emission of longwave (infrared) radiation by the atmosphere which results in the warming of the Earth is called the greenhouse effect. 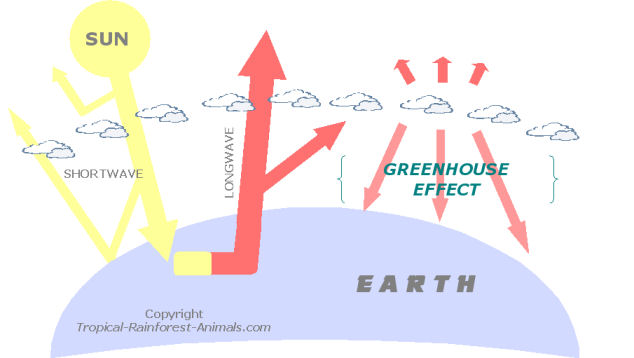 The Earth’s atmosphere is a unique environment which consists of a number of naturally occurring gases.

The content of the atmosphere is roughly as follows: (Ref. 17)

It is exactly some of these gases in the atmosphere (e.g., water vapor and carbon dioxide) that trap the upward-going longwave radiation emitted by the Earth, re-emit it in all directions and thus contribute to the warming of the planet.

The gases that take part in this process are called radiatively active gases, or greenhouse gases.

Among the most important naturally occurring and man-induced greenhouse gases are:

There are natural concentrations of greenhouse gases in the atmosphere which work to keep the planet warm.

These natural concentrations were pretty much constant during the Holocene (a period that started roughly 11,500 years ago) and before the industrial revolution. (Ref. 18)

However, with the advent of the Industrial Age at the start of the 19th century, the concentrations of greenhouse gases have increased dramatically and have been attributed to human actions.

In simple terms, this means that the functioning of the modern industrial society produces additional amounts of greenhouse gases emitted into the atmosphere.

These additional amounts trap even more longwave radiation and re-radiate it back to the Earth.

This, in its turn, leads to the rise of the surface temperature and establishment of a new “equilibrium” temperature with a new given amount of radiation in the system.

Thus, human-induced increases in greenhouse gas concentrations are now so significant that they have been largely blamed for the recently observed accelerated rates of global warming. 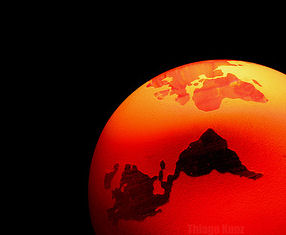 Following the discussion of the greenhouse effect above, it becomes clear that the rise in the average temperature of the Earth (i.e. global warming) can take place in 3 ways: (Ref. 19)

Such increases (as well as decreases) in the quantity of radiation circulating through the Earth’s atmosphere are measured in terms of “radiative forcing”.

Therefore, radiative forcing is the net change in the amount of radiation that comes into, and goes out of, the atmosphere. It is measured in Watts per square meter (W m2).

This net change in radiation quantity may be compared to the total shortwave solar radiation of around 342 W / m2 per year that the Earth currently receives. (Ref. 20)

Between the years 1765 and 2000 the Earth witnessed a net increase of 2.45 W / m2 in the total amount of radiation. Carbon dioxide, an extremely important agent of global warming, has contributed around 60% to this increase. (Ref. 21)

This is an example of the positive forcing effect on the global temperature.

Negative forcing (i.e. net decrease in the amount of radiation) contributes to the cooling of the Earth’s atmosphere. Aerosols are an example of a climate agent that contribute to the negative forcing effect.

To summarize it all, the greenhouse effect and radiative forcing are among the most important concepts that lie at the heart of the science of global warming.

The main fundamental causes of global warming are two-fold:

The first one is our total dependence on the burning of fossil fuels to generate energy to power our industrialized lifestyles.

The second one is the way we use our land to produce food, timber products etc.

These economic activities are the major drivers of an increase of greenhouse gas concentrations in the Earth's atmosphere.

The effects of global warming are indeed numerous and far-reaching.

Among other things, they include: changed climate patterns and the rise global sea level, reduction in snow cover & glacier retreat, rise in extreme weather events such as floods & droughts, loss of plant & animal diversity, reduced water supplies and decrease in agricultural productivity. 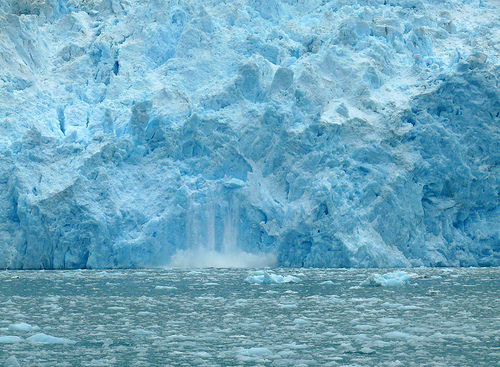 As global warming marches on and its effects unfold, the shrinkage of the Arctic ice cover that has been observed by the beginning of the 21st century may possibly be called a “poster case” for global warming.

This particular region is not only a passive recipient of the global warming phenomenon with all its effects following, it is also an active agent in bringing about further global changes as a direct result (feedback) of the warming effects it is experiencing now.

In other words, it is both a result and a cause of global warming.

The Arctic Climate Impact Assessment prepared by the Arctic Council and released in 2004 gives an excellent overview of the current state of the Arctic region from the point of view of climate change.

All the information provided below is based on the findings of this report. (Ref. 22)

Here is some evidence that global warming is indeed affecting the Arctic region:

Some of the current and potential future effects of the Arctic shrinkage:

It is becoming more obvious that changes to the Arctic system are happening much faster than predicted even several years ago.

The WWF 2008 update report on the Arctic climate change makes a reference to ”the recent severely accelerated melting of both the Greenland Ice Sheet and the Arctic sea ice.” (Ref. 23)

For example, the extent of Arctic sea ice was the lowest on record in September 2007. During this period, the extent of sea ice was 39% less than its 1979 – 2000 mean. The main reason for this is believed to be climate warming which reduced both the area and thickness of multi-year ice and made the remaining ice more vulnerable to summer thaw. (Ref. 24)

The melting of the Greenland Ice Sheet would have a particularly significant effect on global sea level. If this entire ice sheet melted, it would raise the sea level by 7.3 meters, with destructive effects all over the planet. (Ref. 25)

It is pretty clear that the real solution to the Arctic shrinkage problem lies in solving the issue of global warming as such.

The sooner we sort it out, the better – the time is certainly running out fast.

We hope we provided enough information to answer your very important question - what is global warming.

Global warming is probably the biggest challenge that humanity is facing right now. We can also think of it as being part of air pollution.

The evidence is clear: global warming is caused by our own actions.

Up to today, we have already emitted such huge amounts of greenhouse gases that they will be enough to cause the warming to continue for decades and possibly even centuries ahead.

There is a real need for every single citizen of the Earth to act, and act right now, no matter how small our actions may seem to us.

Maybe, this period of trial for the whole planet is also a great opportunity for us to bury our differences and come and act together - there is simply no other real way to beat this global challenge.

7. Intergovernmental Panel on Climate Change. (May 1, 2008). In Wikipedia, The Free Encyclopedia. Retrieved May 30, 2008 from http://en.wikipedia.org/w/index.php?title=Intergovernmental_Panel_on_Climate_Change&oldid=209470020