Global warming facts demonstrate unambiguously that global warming is a very serious issue, and it should be acted upon as a matter of urgency. 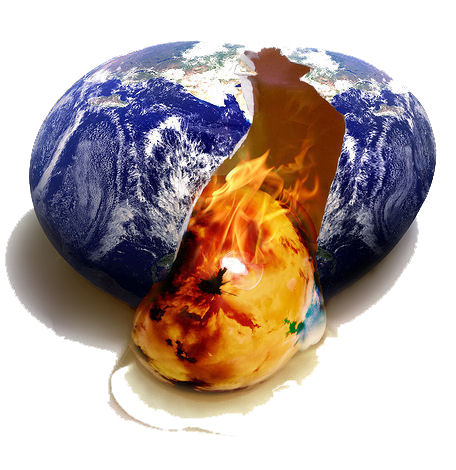 Global warming is an increase in the average temperature of the surface of the Earth (air and oceans) over the last 100 – 200 years.

The world is now hotter than at any time in the last 800 years. (Ref. 1) Further warming of more than 1°C will make the earth warmer than it has been in a million years. (Ref. 2)

As a result of global warming, during the 20th century sea levels rose by 17 cm (6.7 inches); they rose faster in the 2nd half of this century than in the 1st. 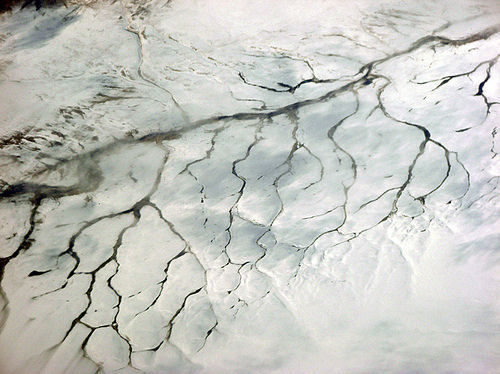 Ice sheets over Greenland lost almost 250 cubic kilometers of ice in the years between 2004 and 2007.

In March 2002 the vast Larsen B Antarctic ice-shelf dramatically collapsed releasing 5 billion tons of ice that shattered into tens of thousands of icebergs and drifted off into the ocean. (Ref. 3)

The Earth is warmed naturally through the process called the greenhouse effect. During this process certain "greenhouse" gases in the atmosphere trap some energy (heat) emitted by the Earth into space, then re-radiate it back on to the ground and thus warm the planet.

The natural concentrations of greenhouse gases in the atmosphere (which work to keep the planet warm) were pretty much constant during the Holocene – a period that started roughly 11,500 years ago – and before the industrial revolution. They increased dramatically since the advent of the Industrial Age at the start of the 19th century.

Below are the pre-industrial and current concentrations of the main greenhouse gases in the atmosphere: (Ref. 4)

Transport is a major man-made cause of greenhouse gas emissions. Photo: Doron Laor

The causes of global warming can be both natural and human-induced. 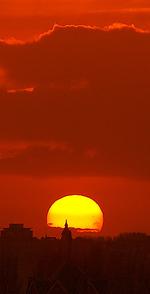 The natural sources of the Earth's warming are:

While the greenhouse gases are direct agents of global warming, industry and land use are its fundamental human-induced causes.

Over the past 100 years, the amount of carbon dioxide in the atmosphere has increased by around 25%. (Ref. 5)

Coal is the dirtiest of all fossil fuels.

Deforestation is an unwanted by-product of land use activities in tropical countries. It is a source of large amounts of carbon dioxide (CO2) being released into the atmosphere, especially if forest fires are used to clear land for different purposes.

The contribution of the 3 main greenhouse gases released by human activities to the total temperature rise over the next 100 years is projected to be:

The following global warming effects have already been recorded, or projected to take place in the future.

Tropical cyclones only develop at tropical latitudes when sea surface temperatures exceed 27°C. The energy released by a single tropical cyclone in one day would be enough to power the entire industrial production of the US for one year. (Ref. 7) 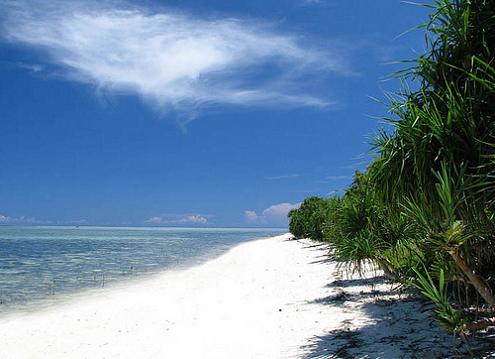 Fact. Global sea levels are expected to increase further along with temperature increases.

Fact. An increase of 2°C would cause complete melting of the Greenland ice sheet and would cause global sea level to rise by 5 – 6 meters. This would submerge many islands and lowland regions, ex. US Gulf Coast, much of the Netherlands and Belgium, major cities – Tokyo, New York, Mumbai, Shanghai, Dhaka.

Fact. Complete loss of the West Antarctic ice sheet (if it were to occur) would lead to a 10.5 m rise in the global sea level. 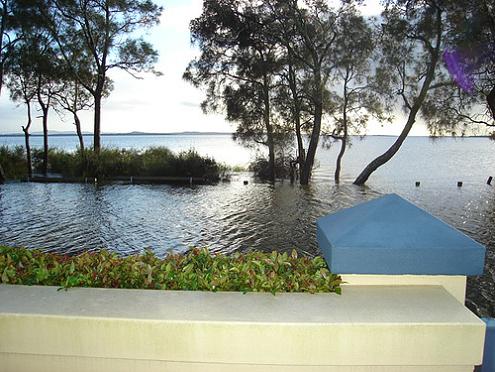 Below we present some potential events which can take place in the future due to global warming.

Fact. Coastal areas are the parts of the planet that are most vulnerable to the effects of global warming. Rising sea levels would flood many of these lands and negatively affect humans populations inhabiting them. Some island nations would likely need to re-locate altogether.

More Facts. Governments of several island countries are already being forced to think of complete relocation of their populations to other, safer lands. This, for example, is the case for the nations of Kiribati (located in the Pacific Ocean) and the Maldives (located in the Indian Ocean).

Fact. Forests may be lost because of the warmer and drier climate conditions, and otherwise badly affected by global warming, ex. through the growth of pests encouraged by warmer temperatures. Forests themselves may contribute to global warming when they are destroyed, especially by way of forest fires which lead to the release of large amounts of CO2 into the atmosphere. 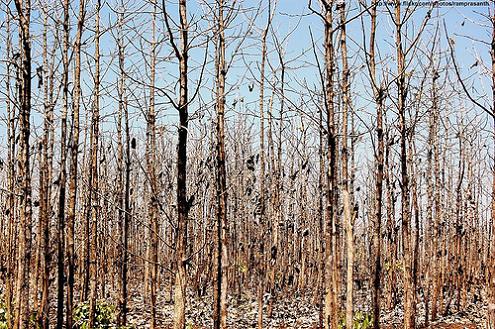 Fact. Mountains will experience the melting of their snow cover and retreat and disappearance of glaciers. This will reduce the availability of water that runs off from glaciers during the warmer summer months, thus affecting irrigation of crops and drinking water supplies.

Fact. Oceans are the largest carbon sinks in the world. The increased concentrations of carbon dioxide in the atmosphere force the oceans to absorb more and more of this greenhouse gas. This process has led to ocean acidification which has been blamed for damaging coral reefs and other shell-forming organisms.

Fact. Permafrost will also be affected by warmer temperatures. It is expected to "thasw", release significant amounts of methane into the atmosphere and therefore further contribute to global warming. 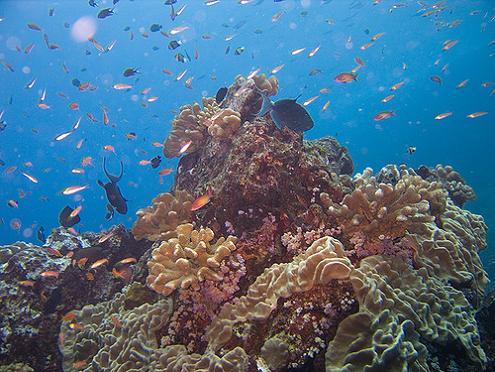 Fact. Many animal species face a risk of extinction exacerbated by global warming. This, for example, can happen indirectly through the loss of habitat or directly by contracting deadly heat-induced diseases.

Fact. Animals may also be affected by reduced availability of food and water as a consequence of global warming.

Fact. Other effects on animals & plants include:

Fact. The warmer climate will lead to the reduced availability of water supplies which are crucial for the well-being of human populations. 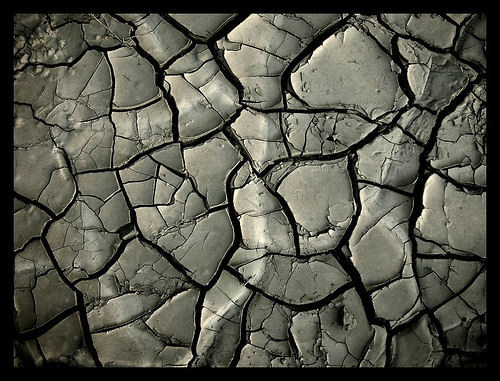 More Facts. Droughts and the lack of sufficient water supplies have already caused possibly one of the worst conflicts in modern human history which occurred in an African country of Sudan, specifically the Darfur region. The conflict, that started in 2003, was preceded by decades of drought, desertification and overpopulation in this country. This situation forced members of the Arab Baggara tribes searching for water for their livestock to travel south, the land populated by non-Arab farming communities, and fight for scarce resources. It is estimated that this war resulted in at least 450,000 deaths.

Fact. The water quality will also be compromised by heavy precipitation events which may contaminate drinking water supplies.

Fact. Extreme weather events such as droughts and floods will be destroying agricultural crops.

More Facts. About 45 percent of the world's population currently lives in areas where the climate is potentially suitable for malaria transmission, and as the planet continues to warm that proportion could increase to 60 percent by century's end. (Ref. 9) 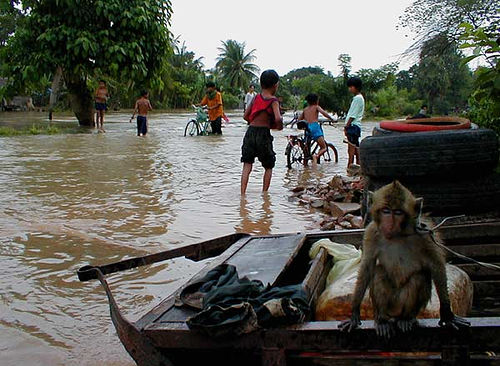 Fact. Extreme events such as heat waves, floods and tropical cyclones will be a major cause of human deaths.

More Facts. The summer of 2003 in Europe was the hottest since 1500, and in August of that year the heat wave killed 20,000 people in France and thousands more in other parts of Europe. (Ref. 10)

Fact. Many millions will suffer from malnutrition because of shortages in food supply which will lead to weakened immune systems and general health deterioration.

Fact. Habitat loss may be another severe impact of global warming on coastal communities.


Specific References for This Article.