"No one who looks into a gorilla's eyes - intelligent, gentle, vulnerable - can remain unchanged, for the gap between ape and human vanishes; we know that the gorilla still lives within us." ~ George Schaller (Ref. 1)
Endangered gorillas, our close relatives, keep reminding us that if we do not save them from imminent extinction, we may forever lose this unique chance to gain more knowledge about evolution of life on Earth. 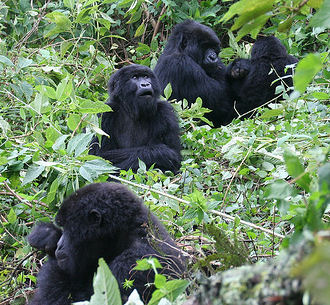 So why should we care about endangered gorillas?

First of all, we should care about these animals because of ethical considerations. They have the right to exist like every other living organism on Earth.

But we also should care about them because there is still so much that we don’t know about the world around us. Our interactions and studies of gorillas can certainly help us learn more both about the nature in general and about ourselves in particular.

As we look back into the history of human evolution in an attempt to understand the mystery of our origin and presence on this planet, the current well-being of non-human apes (including gorillas) has undoubtedly captured everyone’s imagination.

A very long time ago humans and non-human apes (specifically the chimpanzee and the gorilla) shared a common ancestor from whom we diverged genetically around 5 – 7 million years ago. (Ref. 2) This resulted in biological similarity between these two groups of living beings.

Ceding only to the chimpanzee, gorillas are humans’ second closest relatives sharing at least 97% - 98% of their DNA with us. (Ref. 3)

If you don’t know a lot about gorillas, you will be amazed at just how intelligent and fascinating these animals are.

Endangered Gorillas – Who Are They?

The most recent classification identifies two species with two subspecies each: (Ref. 4)

All the gorilla species live in tropical rainforests of Central Africa.

The western gorillas (Gorilla gorilla) are native to several countries in the west of the continent, including Angola, Cameroon, Central African Republic, Congo, Equatorial Guinea, Gabon, Nigeria and, possibly, in the Democratic Republic of the Congo. (Ref. 5)

The eastern gorillas (Gorilla beringei) inhabit the montane and lowland tropical forests of the transboundary area of 3 countries: Rwanda, Uganda and the Democratic Republic of the Congo.

For a visual presentation of the gorilla geographical distribution, please see the map below.

(In reality however, the figure of 95,000 for western lowland gorillas mentioned above is bound to be much lower due to the new threats to the gorillas’ existence (such as commercial hunting and outbreaks of the Ebola virus) that have not been accounted for before. (Ref. 7))

Classification of Gorillas as Endangered Species

The IUCN Red List defines the level of threats to the gorilla species as follows:

Habitat loss and degradation are considered to be the main cause for endangerment and extinction of many animal species.

Until recently, habitat loss (specifically, through forest clearance for logging and framing) was also considered the major problem for the well-being of gorillas in the wild.

And though this problem is still there, during the last couple of decades other serious causes for gorilla endangerment have come to the fore.

The experts now claim that commercial hunting (“harvesting”) of gorillas for bushmeat trade is now a more serious driver of gorillas’ decline.

Commercial hunting is significantly facilitated by mechanised logging which nearly doubled in the region between 1991 and 2000. Logging operations not only deplete the region’s rainforest / wood resources (to the detriment of the local population) and cause gorillas’ habitat loss, but logging vehicles are also used to transport bushmeat, and logging employees are the main bushmeat consumers. (Ref. 10)

Another major problem is the Ebola virus, specifically in the case with western lowland gorillas. The Ebola virus is believed to have decimated large numbers of gorillas and chimpanzees in remote forest blocks, right in the middle of the animals’ habitats, since the early 1990s. (Ref. 11)

Other diseases that have been mentioned are measles, scabies and the flu. (Ref. 12)

Another surprising threat that has been recently distinguished is tourism (as is the case with mountain gorillas). (Ref. 13) One of the major problems with tourism is that gorillas are highly susceptible to human viruses and diseases.

Possibly like no other endangered animal, gorillas even became victims of wars and military conflicts taking place in their habitats.

As an example, we’ve seen reports that 2 mountain gorillas were killed by landmines and 13 others died as a direct consequence of military conflicts in Rwanda during the 1990s. But such incidents are reported to be infrequent. (Ref. 14)

Another cause for concern is the use of gorillas for pet trade.

Some Effects on Gorillas of Their Contacts with Humans

Indeed, gorillas have had plenty of negative encounters with their human counterparts.

There are some reports about gorillas who were orphaned after their parents had been killed for bushmeat. As babies these gorillas witnessed their parents’ extremely painful deaths, and were then sold as pets to someone else.

It’s a well known fact that wild animals do not make good pets.

So once baby gorillas grow up in their “adopted” families, they become unmanageable and are subsequently abandoned (or even killed) by their owners. That is how they become orphaned, if they are not killed. (Ref. 15)

Another example, perhaps one of the most outrageous treatments of gorillas by humans ever, was a recently uncovered suspected attempt by Soviet leader Joseph Stalin to create so-called “invincible” soldiers by cross-breeding humans and gorillas (“apemen”). (Ref. 16) These claims have yet to be substantiated though.

At least 3 gorilla species are classified as critically endangered (as discussed above), and this should make us all think about how close we really are to losing them for good.

The IUCN states that gorilla reproductive rates are extremely low.

As an example, even if the two major causes of the decline of western lowland gorillas – hunting and Ebola virus – are immediately eliminated, the gorilla population would still require around 75 years for recovery. (Ref. 17)

So can the endangered gorillas be saved? The success of conservation efforts that was achieved with the mountain gorillas, demonstrates that it is possible to bring gorillas back from the brink of extinction.

At the beginning of the 1990s, a group of leading scientists founded the Great Ape Project, whose aim is to obtain for non-human great apes “…the fundamental moral and legal protections of the right to life, the freedom from arbitrary deprivation of liberty, and protection from torture” (ref. 18), basically the same rights granted to all human beings.

It is certainly a revolutionary idea which, if put into practice, could indeed achieve a lot, not only for endangered gorillas but for all the non-human apes and for humans themselves.

2. ARMY OF THE APEMEN; This Week's Most Macabre Question? Did Stalin Try to Crossbreed Humans with Gorillas and Create a Race of Super-Soldiers. (December 22, 2005). The Daily Mail (London, England). Retrieved January 25, 2008 from Questia.com

15. Delinquent and Dangerous - a Group of Wild Gorillas Are Part of a Remarkable New Rehabilitation Experiment in Which They Are Sent for a Fresh Start in Life on an Alcatraz-Style Island ASBO GORILLAS. (March 19, 2007). The Daily Mail (London, England). Retrieved January 25, 2008 from Questia.com http://www.questia.com/PM.qst?a=o&d=5019918553

16. ARMY OF THE APEMEN; This Week's Most Macabre Question? Did Stalin Try to Crossbreed Humans with Gorillas and Create a Race of Super-Soldiers. (December 22, 2005). The Daily Mail (London, England). Retrieved January 25, 2008 from Questia.com