The blue poison dart frog is a very beautiful tropical animal indeed. Its whole body is of blue colour, with black spots or patches normally covering the head and back. (Ref. 1) 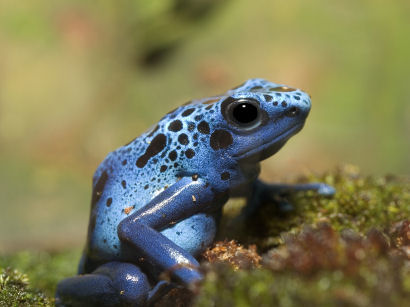 It can also be recognised by its hunch-back appearance. (Ref. 2)

This frog was only discovered in 1968, in several isolated “rainforest islands” in the Sipaliwini savannah of Latin American country Suriname. (Ref. 3)

Researchers think that the blue poison dart frog is a relic species living in isolated patches of a relic rainforest that must have given way to dry grassland a long time ago. (Ref. 4)

This frog is not as tiny as the strawberry poison frog, and can reach a length of 5 cm. (Ref. 5) You might still consider it quite small though!

Like in case with other poison dart frogs, the blue frog’s coloration is its protection mechanism against potential attacks from predators.

In their reproduction behaviour, the blue poison frogs are very similar to the strawberry poison frogs.

During the mating process, the male aggressively defends its territory. The female lays her eggs normally in moist, mossy areas under rocks and logs. The male looks after the eggs and keeps them moist by his bladder on them until they hatch (after 14 – 18 days). (Ref. 6)

After hatching, the male carries tadpoles to small pools of water, for example in a bromeliad plant, the same way as strawberry poison dart frogs. (Ref. 7)

Blue dart frogs’ tadpoles are cannibalistic and are quite often placed in separate pools. After that, it will be the sole responsibility of the female to visit the tadpoles and provide them with food (unfertilised eggs). (Ref. 8)

Tadpoles will metamorphose into adult frogs within about 10 – 12 weeks after hatching. (Ref. 9)


Is the blue poison dart frog an endangered species?

The fact that the blue poison frog is endemic to a specific area in Suriname makes it very vulnerable indeed.

The IUCN Red List of Threatened Species currently lists it as a Vulnerable species. The justification for that is that it is only found in "one locality and it occurs only in forest fragments that are threatened by forest fire." (Ref. 10)

The IUCN also states that though there is still some illegal collection of the blue poison dart frogs for the international pet trade, it is no longer a serious threat as this species is now extensively bred in captivity. (Ref. 11)