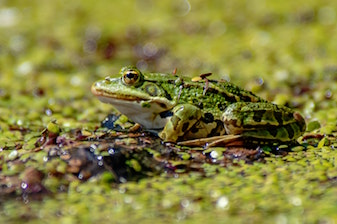 The need for amphibian conservation is clear.

See our discussion on the causes of most recent amphibian declines in the Amphibian Declines article.

However, the lack of clear understanding of the factors causing amphibian declines makes the achievement of positive results in this area quite challenging.

I agree with opinions of those authors who state that amphibian conservation will probably be most efficient if implemented as part of broader animal conservation strategies, and within the framework of protecting not only particular amphibian species and other endangered animals but the whole ecosystems.

A recent joint effort by leading environmental organisations IUCN – World Conservation Union, Conservation International and NatureServe resulted in the release of a comprehensive assessment of the world’ amphibian species in 2004 (Global Amphibian Assessment). The study is now being used to develop and implement conservation strategies to help protect threatened amphibians. (Ref. 1)

The study found that Latin American countries have the largest number of threatened amphibian species with Colombia, Mexico and Ecuador topping the list. (Ref. 2)

But the highest levels of threat for amphibians are in the Caribbean Basin with some countries reaching the levels of 80-90% (!) of all of their amphibian populations under threat. (Ref. 3)

Scientists working for the Global Amphibian Assessment programme came up with a number of conservation strategies and policy measures in an attempt to prevent further global amphibian declines.

In order for the global community to be successful in stemming further declines of amphibian species, the scientists stressed the need for further research into the causes of amphibian declines and extinctions (such as: emerging amphibian diseases, for example, the ones caused by fungi; climate change; environmental contamination) as well as the need for the continuing documentation of amphibian diversity and how it is changing. (Ref. 4)

Here are some of their main recommendations for amphibian conservation: (Ref. 5)


This is a very important objective as the habitat loss and degradation are affecting nearly 90% of all threatened amphibians.

If required, captive breeding may be used to provide amphibians for reintroduction into the wild.


Amphibians have been traditionally a source of food and medicines in a number of countries, specifically in some Asian societies. And this (in addition to the international pet trade), has resulted in significant amphibian declines. Therefore management of such commercial harvesting has been proposed as another measure for protecting amphibians.

The scientists have also called for the establishment of an "amphibian emergency fund" that would be in place to address immediate threats to survival of amphibian populations. (Ref. 6)

Some other sources suggest more specific measures such as providing corridors to facilitate the migration of the populations of amphibians between each other, or conducting periodic translocations among separated populations in fragmented habitats. This can help facilitate the gene flow between populations. (Ref. 7)